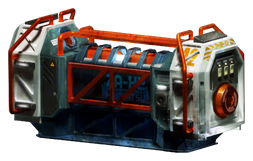 “Eternity Among The Stars”

The ARK is an AR-Capsule (Artificial Reality Capsule; ARC)—the name being a play on the acronym and the ship entitled Noah's Ark—created by Dr. Catherine Chun with a Haimatsu ZA-X2 Experimental Module. It is the successor of the Vivarium.

What was originally a pet project for Chun became much more serious to her after the Impact Event; creating a virtual utopia in which the human species could live on as virtual representations. The early concepts utilized compressed Nakajima neurograph brain scan models and a relatively standard though modified equipment until the WAU improved both the scan method with the Pilot System and created the Vivarium, supposedly based on Chun's early concepts.

When the Vivarium was found, machinery modified by WAU that was acting on its own, Imogen Reed was tasked with studying it while, at the same time, Chun was actively developing an AR-Capsule. Chun later suspected that the WAU copied her own AR-Capsule and both machines were quite similar except in one aspect: Chun's AR-capsule utilized compressed Nakajima neurograph models produced from David Munshi's brain scan technology where the WAU's AR-capsule allowed a perfect copy of the human mind to run unlimited. This thrust of development officially spawned the ARK-project.

In 2103-07-04, Chun commenced scanning people who were willing to participate in the project, with the WAU's method of using the Pilot System as brain scanners. In eight days, Chun had scanned 7 people in total and the latest person, Mark Sarang, committed suicide immediately after.

Security Chief John Strohmeier and others attempted to learn why this suicide occurred and did so by forcefully entering Mark Sarang's room in Theta, in violation of Carthage Industries' company policy. Mark Sarang based a belief called "continuity" that regarded the brain scans which proposed the idea to end one's previous existence after being scanned. The belief soon spread at PATHOS-II and was soon adopted by other, like-minded, people who waited for their turn to be scanned.

The suicide halted the project for seventeen days, until 2103-07-29. The ARK-Project continued but experienced another suicide after only three scans. The project continues in spite of the suicides. After fourteen more scans and four suicides, Security Chief Strohmeier reprimanded Chun and would prematurely end the scan phase of the ARK-Project if one more suicide occurs.

Security Chief Strohmeier sometime during the suicides urged people not to commit suicide as life was depressive enough due to the Impact Event. After four more successful brain scans, Guy Konrad commits suicide. Chun initially wanted help to cover up the death but was, presumably, discovered. Security Chief Strohmeier officially suspended the ARK-project.

Sometime between 2103-11-01 and 2103-12-25, an assembled team consisting of Chun, Sarah Lindwall, Ian Pedersen, Nicolai Ivashkin, Jasper Hill, had the objective of transporting the ARK to Phi to launch it into space via the Omega Space Gun. In 2103-12-25, the team passed through Omicron and Tau and scanned the entire personnel, except for Adam Golaski and deceased personnel. In 2103-12-27, the team arrived at Phi.

But shortly after the team's arrival at Phi, the team was divided on what to do. The majority of the team, especially Pedersen, was unsure if the ARK would survive the launch due to the dust-filled atmosphere and the "broken barrel," opted to keep the ARK safe on the bottom of the sea in the station. But Chun refused and insisted on launching it. A scuffle between the team resulted in the murder of Chun, the event was ruled as an accident by the rest of the team.

The team retreated to Tau to figure out their next plan of action. The ARK would remain there for five months until approximately 2104-05-11, when the events of SOMA occurred.

In Transmission #8, toward the end, we see images from inside the ARK on the walls of Upsilon where, on a sunny day, the uploaded brain scans of Adam Golaski and Imogen Reed embrace.

At Lambda, Catherine Chun informs Simon Jarrett of the ARK project and asks him to determine the vessel's whereabouts. Simon finds a terminal containing information about the ARK vessel, including its approximate location via a built-in tracer. Using the tracer, he finds that the ARK is currently situated in Tau. From this moment on, Simon travels through the many stations of PATHOS-II with the completion of the ARK project as his main goal.

In Tau, Simon finds the ARK under the guard of the last surviving human being, Sarah Lindwall. After conversing with her, she allows Simon to take the ARK to launch. Simon transports the ARK in a cargo hatch leading to a separate Dive Room, where he is able to hook it onto a cargo transport system leading to Phi.

In Phi, searching through the lower level of the station, Simon finds the ARK intact and still hooked to the cargo arm. He carries it to the assembly space and loads it into the Space Gun's missile shell. Both Simon's and Catherine's consciousnesses are copied onto the ARK and it is launched.

The Simon copied to the ARK wakes up in an idyllic landscape, completely unaware of his other version left behind on PATHOS-II. He is soon reunited with Catherine in front of a futuristic island city. Meanwhile, it is shown that the ARK successfully makes it into space as it leaves behind a devastated Earth, ending the game.

The ARK consists of a virtual simulation of the world including modular space, mixed deciduous forest, and an urban park, in which the brain scans made of PATHOS-II employees could be uploaded to and experience a simulated reality.

The uploaded person seemingly had some control over their virtual physical presentation. According to Catherine Chun, Simon Jarrett, who can lose an arm depending on player-based decisions, will still have it inside of the ARK.

The ARK was designed to be placed in the payload section of a rocket then to be launched into space with the Omega Space Gun and, in theory, last for thousands of years powered by solar batteries. Though the ARK still contained batteries capable of lasting for a couple of decades.

The ARK team created a poll for the ARK-Project that was passed to personnel of PATHOS-II. It was also available inside of the ARK. The questions and possible answers are as follows: 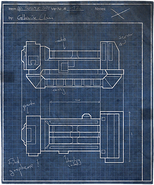 Blueprint for the prototype ARK body. 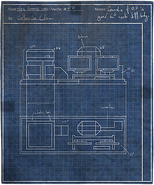 Blueprint for the prototype ARK console. 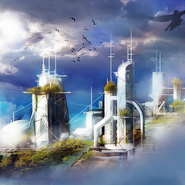 An in-development render from inside the ARK of the city, named Cyan. 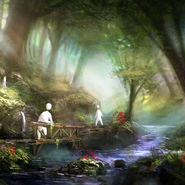 Ditto, of the forest, named Keywood. 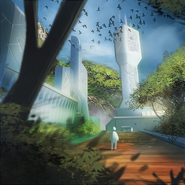 Ditto, of the park, named Aurous.

A more expansive image of Keywood, without the scale references.

A photo of the ARK in the Theta labs. 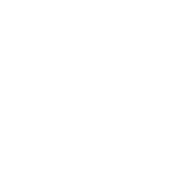 A sort of numerical symbol seen on the ARK.

A label on the ZA-X2 Experimental Module, the base of the ARK, for a piece of Haimatsu hardware used in it called Fusionwire.

A label on the ZA-X2 Experimental Module disclaiming Haimatsu of liability for any damages that may occur.

The Cyan city vista in the ARK.

Catherine on the beach in the ARK.
Community content is available under CC-BY-SA unless otherwise noted.
Advertisement