Alice Koster is a Canadian Payload Manager on PATHOS-II, stationed at Theta. In SOMA, she was the love interest of her colleague Brandon Wan, her comatose body can be found in the lower levels of Theta.

She was part of the group that attempted to leave Theta when it was overrun by proxies. However, she was ultimately unable to escape and was captured and assimilated by Terry Akers at the shuttle station.

Alice's "human" form can be seen when it is used by Catherine Chun inside of the simulation of Brandon Wan. She can be heard on a data buffer near the elevator of the Theta Labs evacuating to the basement with the rest of the group.

Her body can be found inside of the shuttle at the shuttle station. She is kept alive by being hooked up to the WAU. If you stand by her body and listen closely, you can hear her having a dream of being on a date with Brandon.

The story of Wan and Koster was originally much more grim and morose. They had a child together, but when everything went down and they were separated, Wan had the baby, along with a gun, and used the gun to shoot the baby and himself. 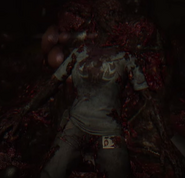 Alice Koster found inside the shuttle under Site Theta labs.

The ID badge used by Alice. Note that the text is reusing Brandon Wan's information, as the badge was not intended to be seen up close. 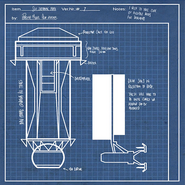 A blueprint for a "Self Sustaining Probe" by Alice, likely intended for the ARK, with the signature "Payload Manager Alice Koster".
Add a photo to this gallery
Retrieved from "https://soma.fandom.com/wiki/Alice_Koster?oldid=17245"
Community content is available under CC-BY-SA unless otherwise noted.