“Are you okay, Simon? I think you're bleeding.”

Ashley Hall is a Canadian woman and employee at the Grimoire. She was Simon Jarrett's friend and colleague, who died due to a car accident at 23 years of age, on April 9, 2015. Simon appeared to be romantically interested in her.

Ashley was in the passenger seat of a car driven by Simon when, in the intersection of Bloor Street and Spadina Road, the vehicle was hit by an SUV whose driver was distracted by her children. While mother and the children were left bruised but unharmed, Ashley died from suffocation due to blood filling her lungs.

Simon has a nightmare of the crash on the day of the scan, with elements of the aftermath of the crash bleeding into the moments before it occurs; Ashley notices blood dripping from Simon's forehead, to which he casually responds, "it's just my brain can't stop bleeding from the accident".

Ashley offers him a bottle, Gadutan-755, to him, but he says he's supposed to take it later, "for the scan". Ashley notes that "it's green", and Simon changes the subject, trying to apologize for what's about to happen when Ashley is suddenly called by David Munshi, foreshadowing the phone call Simon will soon receive, and as Simon realizes he doesn't have much time left, "Why is there never enough time!?", Ashley responds to "For what?", and before Simon can respond the crash occurs.

At Theta, after Simon is hunted down and caught by Terry Akers, Simon is seemingly sent back to his apartment in Toronto. Hearing Ashley's voice, he opens his eyes to find himself relaxing on his sofa, the shadow of Ashley in a dress in front of the white light coming from his apartment window, telling him "It's over now. Relax." Simon's confusion over the strange situation and her presence prompts her to ask he if he no longer wants her, Simon immediately refuting, clarifying that he wants her, "but what happened?" She proclaims that they fell in love. This seems to push the limits of Simon's mind, things too far off for the situation to possibly be real, and the hallucination breaks down as Simon regains consciousness, confirming that it was just a coma-induced dream caused by the WAU.

Originally, Ashley was supposed to be Simon's sister rather than a friend and potential love interest, as seen in old design documents. Additionally, during this period in the game, there was a nightmarish sequence in the game that would end with Simon stumbling upon his mother's grave, with his sister Ashley, whose face is comprised of maggots, standing nearby.

This sequence may have survived future iterations of the game before ultimately being cut. The hallucination in the final game that takes place in Simon's apartment may have possibly replaced this, with the same model with the maggot face even being used in the final game, although faced away so the face can't be seen.

The phone being zoomed in on when Ashley is called by Dr. Munshi.

Ashley's face being zoomed in on right before the crash occurs. 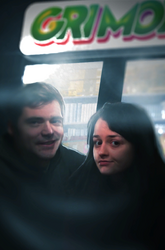 A photo of Ashley and Simon.

Newspaper article detailing the accident and the cause of Ashley's death.
Retrieved from "https://soma.fandom.com/wiki/Ashley_Hall?oldid=17386"
Community content is available under CC-BY-SA unless otherwise noted.