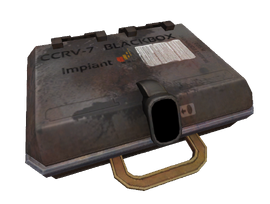 The CCRV-7 Blackbox is a device implanted in the body of every PATHOS-II employee, per company policy. The implants are intended to be an aid for medical personnel, as the Blackbox records biometric data that can be used to facilitate treatments in the event of illness or injury. According to the pamphlet found with an unused Blackbox in Upsilon, they are supposedly inserted into the user's body by means of an autoinjection system.

The Blackbox also records brain wave activity, as Simon Jarrett can touch the corpses of people implanted with Blackboxes, hearing their final moments. Referred to as "hearing the dead" by Simon, Catherine Chun later explains that, as a digitized intelligence, Simon is capable of data mining the Blackboxes for this information.

The Blackboxes also appear to be susceptible to electromagnetic interference, which can result in significant discomfort for the wearer and, in extreme cases, death. After the body of Johan Ross was recovered from the Climber by the crew at Omicron and placed into containment, the staff began to suffer severe migraines and hemorrhaging as the WAU bombarded Ross' body with electromagnetic radiation to instruct the Structure Gel within his body to begin regenerating him. When the WAU learned that Raleigh Herber was planning to bring some unprogrammed structure gel to Alpha with the intent of destroying the WAU, it reacted by releasing a powerful surge of electromagnetic interference, overloading the Blackboxes of the Omicron staff and causing their heads to violently explode. When Simon reaches Omicron later, he comments that he is unable to datamine any of their staff, noting their missing heads. 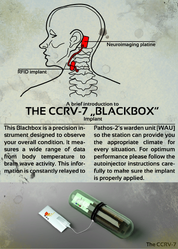 An introductory pamphlet about the CCRV-7. 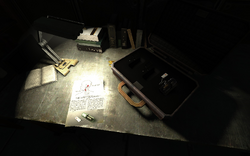 CCRV-7 case and pamphlet on a desk in an Upsilon storage room.
Add a photo to this gallery
Retrieved from "https://soma.fandom.com/wiki/CCRV-7_Blackbox?oldid=14706"
Community content is available under CC-BY-SA unless otherwise noted.