Canada is a country in the northern part of North America. It became a major worldpower thanks to the work done by Canadian natives Dr. David Munshi and Dr. Paul Berg in Toronto, which turned Canada's largest city and Ontario's provincial capital into a leading global technological center.

A prominent Canadian and Torontonian symbol, the CN Tower, can be seen from a PACE Laboratories office in Downtown Toronto. The tower can later be seen on a Canadian postcard found near a makeshift bed made by Amy Azzaro in Upsilon. 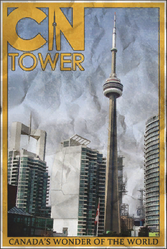