“I was in the pilot seat, remoting a UH – I was just dealing with some heat shields and... that's my last clear memory.”

Carl Semken is a PATHOS-II Wrangler stationed at Upsilon. In SOMA, he appears prominently throughout the Upsilon section of the game.

In April 2103, Upsilon was evacuated and its staff was transferred to Theta. Carl Semken and his colleague, Amy Azzaro, remained to set up the Upsilon facility in a way that would keep its thermal plant running and to secure the power production for the entirety of PATHOS-II while the staff was absent by sealing blocks to prevent Mockingbirds from breaking anything.

On May 4, 2103, while Semken and Azzaro were close to finishing their task, Semken was attacked and killed by a Universal Helper robot.

While Simon Jarrett explores Upsilon, he finds a damaged Mockingbird containing Carl Semken's brain scan. The robotic unit believes itself to be a wounded human and begs Simon to call for help. When Simon confronts Semken about his current condition, he reacts in a surprised manner, angrily denying his current state.

Alternatively Simon can disable the reactor flow in the far room. Doing so will redirect power, shutting down Semken's Mockingbird model in the process, effectively killing him. The resulting explosion will also attract the attention of a Construct to the area. 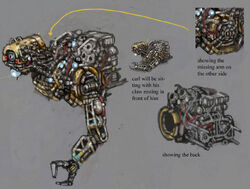 Concept art of Semken's dead body next to his Mockingbird.
Add a photo to this gallery 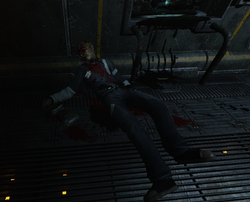 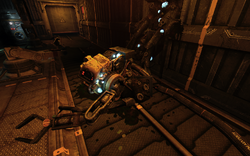 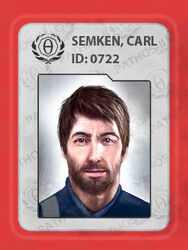 Semken's ID badge.
Add a photo to this gallery

Semken Steam trading card artwork.
Add a photo to this gallery
Retrieved from "https://soma.fandom.com/wiki/Carl_Semken?oldid=17715"
Community content is available under CC-BY-SA unless otherwise noted.