“I never felt that comfortable being human in the first place. This isn't much worse.”

―Dr. Catherine Chun, about being trapped in the Omnitool.[src]

Dr. Catherine Chun is a PATHOS-II Intelligence Systems Engineer stationed at Theta. In SOMA, she is the deuteragonist; throughout the course of the game, she acts as Simon Jarrett's guide and sole companion.

Prior to the game's events, she was part of Omega Management, a spokesperson for the International Asteroid Deflection Program during its operation, and later the creator of the ARK project, being its lead developer.

Catherine is repeatedly described as quiet, shy, and a loner, and during her time with Simon Jarrett, she often demonstrates behaviors which are distinctly asocial. Her treatment of other lifeforms, including Simon, also wavers between endearment and coldly apathetic.

Catherine is rather convinced that she is not very liked by her co-workers due to her reclusive nature and the fact that she has no friends (yet she considers Peter Strasky a friend). Even after having become an artificial intelligence, she still carries the same thought that she is "very difficult to like", in spite of being rather friendly and supportive to Simon that would suggest otherwise.

While Simon is quite hesitant about hurting the station's non-hostile robot inhabitants, Catherine repeatedly tells him that robots are just machines and has no qualms about mistreating them in pursuit of her goals; this is despite the fact that she and Simon are technically robots themselves.

Not much is known about Catherine's life prior to her tenure on the PATHOS-II station, except that she resided in Taipei, Taiwan. During her time on PATHOS-II, Catherine's field of work was intelligence systems engineering, with her being a member of Omega Management, the Omega Space Gun management group, and she was a spokesperson for the International Asteroid Deflection Program. She began working on an alternate reality capsule project. After learning of her co-worker Imogen Reed's tests with the Vivarium prototype model, Catherine looks into it and finds that the WAU had used her capsule's concept to construct a scene around its Reed model, which was in itself a perfect scan of the real being, to create a complete simulation of the testing room. Using this concept, she worked to develop her current project into something bigger, thus beginning the first stages of the ARK project.

Sometime soon after the revealing of the project, PATHOS-II employees were prompted to have their beings scanned for transfer on the ARK before its launch from the Omega Space Gun, with Catherine's scan being conducted first as a test run. However, after Mark Sarang opted to commit suicide in order to ensure that he lived on in the ARK and suggested that the rest of the staff do the same, Catherine's colleagues began to show doubts on the project's success and some of them even killed themselves like Sarang did.

During the final stages of the project, an assembled team consisting of Catherine, Sarah Lindwall, Ian Pedersen, Nicolai Ivashkin and Jasper Hill headed to Phi with the ARK in order to launch it from the space gun. Once at Phi, however, the team was divided on the fate of the vessel. The majority of the team, especially Pedersen, was unsure if the ARK would survive the launch, opting instead to keep it safe within the station. Catherine, on the other hand, insisted on launching it and tried to take matters into her own hands; the resulting scuffle saw Pedersen swinging a wrench at Catherine's head, killing her. The event was ruled an accident, and the team decided to head back to Tau to figure out their next plan of action, leaving Catherine's body in the loading room.

The woman who acts as both Simon Jarrett's guide and pseudo-friend during gameplay is a brain scan of Catherine that was first created during the first stages of the ARK project as a test run. Due to this, she is not aware of the events that had happened in Phi a year ago, and is still eager to complete her project. It is believed that she was reactivated when Simon powered up the reactors in Upsilon.

Throughout the game, she is often the one telling Simon where to go and how to get tasks done, since she is trapped in his Omnitool and he is the only one with functional arms and legs. However, she can only do this when the device is docked into a computer or network, allowing her to speak to him through local intercoms; in all other circumstances, Simon is on his own.

Catherine is later attacked by a Flesher moments before Simon enters Lambda. Simon finally meets Catherine, only to be disheartened to find that she, too, is not human, but rather another robot. She convinces Simon to put aside his worries and help her to find a way to finish the final stages of her ARK project, promising Simon that she would find a way for him to live a more peaceful life in the ARK's world. Searching through one of the station's terminals, Simon manages to locate the ARK's beacon in the infirmary at Tau, much to Catherine's distress, as she had hoped the vessel would make it to Phi.

Transferring her into his Omnitool, Simon takes them both to the CURIE, where they locate an escape vessel that would help them travel to Theta in order to acquire the station's DUNBAT to use to dive into the depths of the Abyss towards Tau. However, after a dangerous encounter with another Flesher, the station's reactor is destabilized, causing the structure to explode, the resulting shockwaves sending Simon's escape vessel hurtling towards Delta.

Simon manages to call a Zeppelin, allowing Catherine to pilot it the rest of the way to Theta. Reaching Theta, they locate the DUNBAT and release it from quarantine using new security ciphers acquired from a simulation of Brandon Wan, but before they can board the submersible, the WAU takes over, activating the pre-uploaded brain scan inside it and causing it to release itself and disappear into the ocean. Without the DUNBAT, the two head for Omicron to use the station's Climber as an alternative to reaching the abyss; however, Simon must first find a Haimatsu Power Suit that will help him to withstand the overwhelming pressure of the deep sea. En-route to Omicron, they pass Theta's labs, where a full-body scan of Simon reveals that the basis for his body is that of Catherine's deceased co-worker Imogen Reed.

After finding a Haimatsu Power Suit in the station's Dive Room, Catherine informs Simon that the suit is damaged and needs to be restored to working condition. She tells him to acquire a Cortex Chip, an Energy Pal S.3 and finally structure gel to fuse everything to the suit.

Simon acquires these materials before heading back to complete his scan's transfer to the Haimatsu Power Suit. Once he awakens, however, he finds that Catherine was only able to merely copy his consciousness into the new suit rather than move it, resulting in two separate scans of Simon, sparking a heated argument between him and an apologetic Catherine. She then gives him the option of deactivating his first scan or not before disconnecting herself from the terminal, not wanting to witness Simon's chosen course of action.

After Simon plugs the Omnitool into the Abyss Climber Rig , he begins to reflect on his past choices, as well as the overall situation, while Catherine listens in silence, not wanting to say anything in fear of upsetting him further. She then begins to reminisce about her experiences in her hometown in Taipei, and recounts the sense of awe that she had felt and the connections she shared with her surroundings. Both then begin to share a heartfelt conversation about their future life on the ARK before the Climber briefly loses power, silencing Catherine mid-sentence and prompting Simon to climb to the main control panel and remedy the problem. As the Climber completes its descent, Catherine witnesses Johan Ross staring at Simon for a brief period of time before jumping down into the abyss. Both then make it to the seabed on the outskirts of Tau.

Catherine is reactivated in Phi following Simon's dilemma with the WAU mutations and his ordeal in Alpha. She learns from Simon that the ARK had been discovered in perfect condition and that it is expected to have made it to the station via cargo rail. As Simon recovers the ARK and loads it into one of the Omega Space Gun's launch shells, he discovers Catherine's original body laying on the floor in a pool of blood; datamining the blackbox, he learns that Catherine was killed with a wrench in a supposed accident following an argument with her colleagues regarding the launching of the ARK. He relays the details to Catherine, who seems shocked and confused. Catherine then directs Simon to the Launch Dome to complete the launch. She guides him through the process and, after having both her and Simon's consciousnesses transferred onto the ARK, it is finally launched into space.

Simon, however, finds himself still in the pilot seat and, after calling for Catherine, finds that she is still inside the Omnitool. Simon begins to question Catherine, who assures him that their consciousnesses are on the ARK. Annoyed, she re-explains that scans can only be copied, not moved, meaning that two instances of the both of them now exist. She further explains that, unlike what happened in Omicron, their active minds were not transferred into their new copies, leaving them both stuck in the station. This revelation results in another heated argument between both Simon and Catherine; however, Catherine becomes too stressed, resulting in her overloading her circuits, effectively deactivating herself and, in turn, the Omnitool, leaving Simon stranded in the station alone.

On the ARK, Catherine is seen overlooking the nearby city from its outskirts. Simon calls to her from behind, having passed through a small park after awakening in a cave, and the two reunite. From outside the ARK, it is shown that Catherine's project was a success, and the vessel is now floating in space, drawing power from the sun.

Catherine Chun originally had a British accent before her nationality was finalized, which can still be heard in early gameplay videos of SOMA.

A photograph of the ARK team at Theta, including Catherine.

|A similar photograph of the ARK team at Omicron each in a Haimatsu Power Suit.

Fragment of the photo. 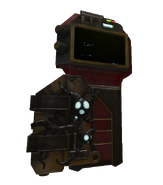 Catherine on the beach in the ARK.

Catherine's face on the game's starting screen. Only fully visible once the game is completed.

Retrieved from "https://soma.fandom.com/wiki/Catherine_Chun?oldid=16517"
Community content is available under CC-BY-SA unless otherwise noted.