For the eponymous Universal Helper that this enemy is made out of, see: BULL (UH3)

The Construct is a large Mockingbird entity and the first antagonist Simon Jarrett encounters in SOMA.

This creature appears to be a horrific jumbled mess of a BULL (UH3) maintenance unit and WAU techno-organic growths. Structure gel mutations have given the Helper a much bulkier build, with a bigger backside and more reinforced structure, as well as added functionality, allowing the Helper to make use of a pair of legs to navigate. Along with the small lights emitting from the numerous bulbous growths on its body, the Helper casts a bright beam from the front of its face, acting as a spotlight to assist with navigation through dark areas.

Hunched forward in a bipedal position, the Construct is fairly slow and easy to maneuver around; the more claustrophobic areas in the upper floors of site Upsilon, however, may hinder Simon's ability to escape if he is cornered. While navigating, the Construct emits loud, disturbing noises similar to a cross between dial-up feedback and human screaming. As it explores it's surroundings, it's feet make loud stomping noises and it makes use of its spotlight to aid in searching the surrounding area; Simon can use these as early warning signs before the creature comes into view.

When coming into contact with the Construct, Simon should remain crouched in order to prevent attracting its attention. Once the Construct spots Simon, it breaks into a sprint, but it's fairly cumbersome and not significantly faster than its idle speed, allowing Simon more time to escape. It does not kill Simon instantly, but renders him unconscious before heading off to another area.

As Simon explores Upsilon's machine hangar soon after awakening in the station, he hears commotion as one of the maintenance bots, overtaken by the WAU, unhinges itself from its docking platform before bursting out of the room and through a wall. He makes his way through the station, inadvertently following the creature, before he first comes into direct contact with this robot in the thermal plant deeper in the station, where he must turn the steam valves and gain access to the upper floors to the Comm Center.

After pulling the lever in the Flow Control room and redirecting the power, Simon once again encounters the same robot, which had moved from the thermal plant into the upper floors after the doors had been reopened. He sneaks around and accesses the terminals to divert power from Flow Control to the door leading to the Comm Center, where he escapes before the robot can reach him. 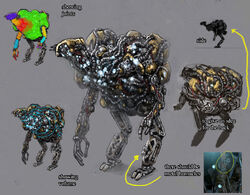 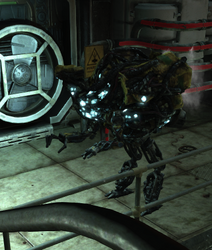 A Side-View of the Construct in Game