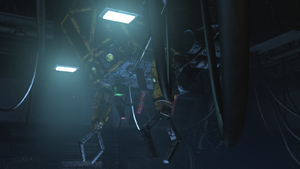 The DUNBAT is a medium-sized submersible vessel. It is made to endure the overwhelming pressure of the abyss, allowing it to be used for deep-sea exploration; it is said to be so well-structured that it could even be capable of reaching depths such as that of the Mariana Trench. PATHOS-II's DUNBAT vessel is docked within Theta.

On January 11, 2104, a massive Structure Gel leak caused the WAU to seize control over the DUNBAT, forcing the vessel to undergo quarantine procedures to avoid further development.

After pinpointing the ARK's location in Tau, Catherine Chun suggests to Simon Jarrett that they take the DUNBAT to traverse the depths of the abyss to search for it. After acquiring an escape vessel from the CURIE and taking a zeppelin from Delta to Theta, Simon and Catherine discover the DUNBAT being held in quarantine near the station's entrance for unknown reasons. Releasing the vessel requires a set of special security ciphers, which Simon and Catherine eventually acquire from a simulation of former security member Brandon Wan.

Having released the DUNBAT from quarantine, Simon hurries to activate the vessel. However, while turning on the DUNBAT's systems and prepping it for release, it suddenly activates and is revealed to be a mockingbird, flying into a panic. It begins to lash out, cursing Catherine's name, before it frees from the dock and disappears into the ocean below. Now without the DUNBAT, Simon and Catherine head for Omicron in hopes of finding a Haimatsu Power Suit and using the station's Climber as an alternative to head down to the Omega Sector.

DUNBAT is possibly an acronym derived from Deep UNderwater BAThyscaphe 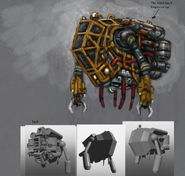