“I’m not the angst-filled doctor desperately looking for a way to bring back his long lost friend that many seem to think I am. It’s true that Simon Jarrett was my first test subject. He died. And it was sad, but not life changing. The work Paul and I did in Toronto was extensive and there were many steps between the first neurograph and the development of artificial intuition.”

―Dr. David Munshi, on his research with Simon Jarrett and Paul Berg.[src]

Dr. David Munshi was a Canadian neuroscientist, who alongside his best friend and colleague Dr. Paul Berg pioneered the neurograph and developed artificial intelligence.

He and Dr. Berg first worked under PACE Laboratories and York University and later for various other unknown institutions. After Dr. Berg's death, one of the universities he worked for was Dartmouth College, which was the last as he retired afterwards.

In SOMA, he is a Ph.D student in computer science alongside colleague Paul Berg at York University in Toronto, Canada, working with strapped funds.

Together with his colleague Paul Berg, a graduate student in neuroscience, Munshi was developing the Neurograph Nakajima at PACE Laboratories in Toronto. Munshi's objective was to scan a damaged brain to produce a computer model, conduct tests on the model without risk, and find the optimal treatment for each patient.

Simon Jarrett, a patient under the care of Dr. Erin Peake at Saint Mary Hospital in Toronto due to brain damage following a car accident, was sent to serve as their first test. His scan was made on May 2, 2015 inside PACE Laboratories in an attempt to find a suitable treatment plan for him.

The proposed treatment plan based on the neurograph model failed, resulting in Simon's death a month later. As stated in a voice record, on June 1, 2015, Simon on his death bed, agreed to let Munshi use his brain scan for future research following his death. Simon's brain scan later became a legacy scan - a historical template for A.I. construction that comes with every development kit.

Many years later, when Munshi is in his seventies, he is interviewed by a journalist named Andrew Mackrell. In it Munshi decides that Mackrell's lack of knowledge about his work can be used for him to "set it straight" and denounce the idea that his only motive for his work was simply to bring Simon back to life.

Mackrell then brings up the topic of Berg's death, with Munshi angrily saying he does not wish to speak about it. Mackrell asks him if he would bring Berg back to life if he could, seeing as how they were life-long friends. Munshi responds by stating that although Berg and Simon's minds could be brought back, it would not be them as they would no longer technically be human. He also states that their new states would make them go mad and become unstable.

Mackrell brings up a hypothetical scenario in which Berg and Simon could be brought back in a stable state, asking if Munshi would still accept them as them. Munshi repeats the question to Mackrell regarding his wife. He responds by stating he would and that a technicality such as not being fully human would not stop him from loving her regardless. The interview concludes afterwards.[1]

The work done by Dr. Munshi and Dr. Berg in Toronto, which turned Canada's largest city and Ontario's provincial capital into a leading global technological center, made Canada one of the world powers on Earth alongside Japan. 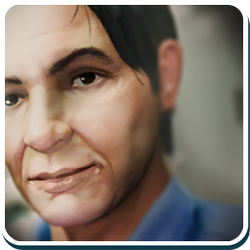 Munshi's smartphone avatar, seen when Simon attempts to call him outside PACE labs.

A bust of Munshi from the cover of a science magazine.