The Fleshers are hostile entities encountered by Simon Jarrett throughout several different areas in SOMA.

Fleshers appear as completely naked humanoids, with a mass of round glowing growths in place of their heads, similar to those seen growing on the walls early in the game. The glow from their heads can make it easier to spot in dark rooms, and they can easily be distinguished from other atmospheric noises by their raspy inhuman moaning, as well as the sharp banging sound produced by their "teleportation"; acts of suddenly disappearing only to reappear. Both the male and female Fleshers' bodies are slightly overweight and significantly larger than Simon's body though this could be the result of the host body bloating due to water exposure.

In the game's files, it shows the stages of infection of the male Flesher. The first image shows first a bald, aging, naked man. The next one shows a light layer of the blue growths covering a part of his face. The final picture shows the current form of the Flesher.

The creatures are seemingly blind and do not react to noise, but appear to be agitated both by proximity and eye contact. Simon's vision is heavily disrupted upon looking at one, with close proximity also causing the same effect.

The Fleshers seemingly teleport at random intervals, an accompanied indicator of this is a loud bang. This cue can be used to track their movement even while not looking directly at them. While these traits make the Fleshers one of the more oppressive enemies encountered in the game, they become relatively easy to avoid once these mechanics are understood.

It is recommended to keep moving through site Lambda and the CURIE once the Fleshers have been encountered, as staying in one location and waiting for them to move may result in them appearing right next to Simon. The Fleshers do not kill instantly with their attacks, instead knocking Simon out and moving elsewhere.

Simon's first potential encounter with a Flesher takes place in the transit tunnels, shortly after the shuttle crash. If Simon forgets his Omnitool and has to go back for it, a Flesher briefly materializes in front of the shuttle, urging him to retrace his steps.

The female Flesher appears in Lambda, where it attacks Catherine Chun and physically impairs her moments after Simon enters the station. She calls out from the room, warning Simon not to look at it when he ventures through the hub section. After Catherine directs Simon through the station in search of a terminal to use to determine the ARK's whereabouts, the Flesher returns briefly, stalking Simon through the corridors and rooms. It disappears permanently from Lambda after Simon enters the correct room for tracing the ARK.

The Flesher makes two brief cinematic appearances on the ocean floor while the player is walking from Lambda to the CURIE.

Another Flesher appears when Simon enters the wreck of the CURIE in search of an escape vessel, where it patrols the submerged halls relentlessly. It seems to cease its search for Simon after he locates a vessel, but suddenly materializes in front of him when he destabilizes the ship's reactor core, giving chase when he runs back to the EV. The Flesher is locked out of the vessel seconds before the ship's reactor explodes, destroying the structure; it is unknown what happened to this Flesher following the explosion.

Throughout the demos of SOMA leading up to its release, this enemy was known as the Jiangshi; however, it is never once referred to by that name in the final release. In Chinese folklore, a 'jiangshi' (僵尸 jiāngshī, also known as a Chinese "hopping" vampire or zombie) is a type of reanimated corpse. The name is most likely a reference to Flesher's habit of seemingly teleporting short distances. 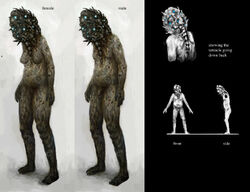