Guy Konrad is a Pathos-II Wrangler at Theta.

Konrad was a large, heavy-set man, as evidenced by Peter Strasky questioning how Catherine Chun was going to "sneak a 300 pound body under the lab" after he committed suicide in the Pilot Seat. He was also apparently fond of body art, sporting tattoos on his arms as well as one on his stomach in runic script reading "familie."

He was also a father of three, as he kept a photograph of his children.

On September 2, 2103, shortly after Catherine Chun scanned Konrad's brain onto the ARK, Konrad committed suicide inside the Pilot Seat using a high-powered microwave emitter on his own head. This prompts Catherine to call Peter Strasky for assistance. She attributes Konrad's death to the string of suicides that have been taking place after Mark Sarang committed suicide on completion of his own brain scan.

Due to Konrad's suicide, the ARK project was placed on hold indefinitely by John Strohmeier, citing the spate in continuity suicides as his reasoning.

A data buffer can be found at Theta near the Pilot Seat in Catherine's lab detailing the conversation between her and Strasky regarding Konrad's death. 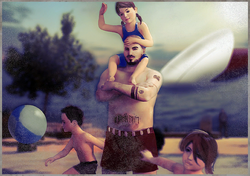 Photo of Guy Konrad with his children on a beach.
Add a photo to this gallery
Retrieved from "https://soma.fandom.com/wiki/Guy_Konrad?oldid=17423"
Community content is available under CC-BY-SA unless otherwise noted.