The Haimatsu Power Suit, also known simply as HPS, or Power Suit, is a heavily-armored deep sea diving suit manufactured by Haimatsu Technologies and used by PATHOS-II staff to protect themselves from the crushing pressure in the Omega Sector.

As the name suggests, the Haimatsu Power Suit is a powered exoskeleton, containing machinery that amplifies the wearer's movements and enhances their effective strength. They were developed from modern atmospheric diving suits, of which in the early 21st Century had a maximum operation depth of 700 meters (a pressure of 70 atmospheres). By the early 22nd Century, this capacity had been greatly increased to 5,000 meters (500 atmospheres) for the purpose of enabling manned exploration and working presence in the oceanic abyss.

When a WAU-corrupted DUNBAT escapes from Theta without Simon Jarrett and Catherine Chun, their backup plan involves traveling to Omicron and retrieving a Haimatsu Power Suit, allowing Simon to safely use the climber to descend into the Abyss.

Simon acquires a Haimatsu Power Suit from Omicron, of which the headless body of Raleigh Herber occupies. Simon crudely rejiggers Raleigh's remains using a cortex chip, battery pack, and structure gel. This enables the suit to become a cybernetic platform for a brain copy of Simon to occupy and control.

When Simon reaches Tau after traversing the Abyss, he is forced to confront Jin Yoshida, whose Haimatsu Power Suit and body have been taken over and augmented by the WAU.

Once Simon is copied into the Haimatsu Power Suit, the player death slides no longer show Imogen Reed. Instead, the face of Raleigh Herber is displayed upon player death. 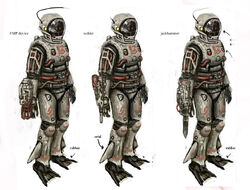 Concept art of a Flesher. At some part in game development the Fleshers where removed and their model was used for the Haimatsu Power Suit. 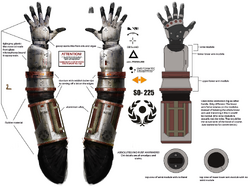 Concept art for the HPS arms. 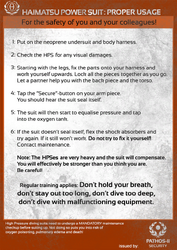 Back view of the suit containing Raleigh Herber's corpse, sitting in the dive room at Omicron.
Community content is available under CC-BY-SA unless otherwise noted.
Advertisement