Imogen Reed is an Equo-American[2] electromechanical engineer who served as a Mechatronics Engineer on PATHOS-II, stationed at Theta. In SOMA, she is a minor but prominent character, and is the protagonist of the mini-series Transmissions.

Imogen Reed was assigned to examine Adam Golaski's Mockingbird when it was discovered. She appeared unsympathetic toward the Mockingbird, while knowing it was loaded with a brain scan copy of a person, and pressured Golaski to continue when he had a conversation with the Mockingbird.

Reed and Chun had many disagreements regarding the ARK project and the usage of the brain scan copies. Reed strongly believed that WAU was manipulating them and that the copies were mere fakes. Despite this, Reed agreed to provide a scan of herself when the ARK project was in the scan-phase. But the scan was corrupted due to a complication during the scan process where Reed suffer a seizure that Chun suspected have caused some mental trauma. Indeed, Reed continued to have seizures and experience fever dreams.

Reed refused to provide a second scan and believed that was the reason why she was relocated to Site Lambda as a member of the Lambda Salvage Crew to salvage supplies.

In Transmission #1, while wandering Site Lambda in search of salvage, Reed and Adam Golaski conversed. Reed is unsurprised and jaded while Golaski is examining their location, filled with leaks of Structure Gel. They found a UH-2 hidden under a tarp, that spoke intelligent phrases. Reed proceeded to disable it while Golaski conversed with it, discovering it to be Harry Halperin, an old co-worker who knew Golaski from their time together at Site Omicron.

In Transmission #2, at Site Lambda command center, Reed changed the bandage on her arm, then sat and listened to traffic control. She passed out and dreamed about ARK and people praising it as their salvation. While in a Haimatsu Ductile Suit, she refused to accept it as her salvation and ended the dream by removing her helmet drowning.

Reed woke and started to weep, the sight of two whales performing a mating ritual beyond her window calmed her with the hope of life. Golaski interrupted her on the radio, requesting assistance.

In Transmissions #3, at Site Lambda cafeteria, Reed arrived where Golaski was standing on a stool and attempting to stop a leak of structure gel with his coffee mug. Reed calmly sat down and watched him for a moment while enjoying a drink but then moved closer and leaned on a table, harshly commenting on his physical appearance. Reed eventually decided to assist him. A lack of supplies had Reed prepare to leave for a refill but Golaski bluntly rather had her hand him some gauze. Reed explained that the leak would eventually continue due to improper repairs, Golaski glared at her, so she left to check on traffic control.

In Transmission #4, at Site Lambda command center, Reed meet Vanessa Hart who would be working with her from now on. The two conversed work details first but eventually Catherine Chun and the ARK project. Hart explained that Chun was worried about Reed, due to the abnormal seizure. Reed dismissed Hart, claiming that Chun merely worried about the scan of Reed. Reed appeared saddened to hear that Chun had left. Eventually, Reed passed out and suffered a seizure during her sleep. Hart comforted Reed, who awoke to alarm sounds sounding due to pressure in structure gel valves and pipes, leaking structure gel throughout Pathos-II.

Reed instantly blamed WAU. Hart mentioned that Golaski also blamed WAU and that he believed WAU was concocting a plan but Hart explained WAU lacked the intelligence to do so. Reed argued that WAU did, indeed, have a plan but Hart continued to explain it didn't. Baxter Rogers interrupted the two.

In Transmission #5, at Site Lambda tram station, Reed and Golaski have finished salvaging one area and sent off the supplies in the tram system. Golaski eventually wondered if Reed had done the scan, Reed focused on pondering why WAU converted a UH-2 to a Mockingbird. Golaski interrupted her, Reed denied having been scanned and claimed that it wasn't for her, she believed that's the reason why she was salvaging at Lambda. Golaski mentioned that he hadn't dreamed since his scan and asked if Reed can dream but she didn't answer.

In Transmission #6, at Site Lambda cafeteria, Reed leaned against a wall while holding a coffee mug and pondering, as Richard Holland, Jessica Davis, Martin Fisher, Baxter Rogers, Hart all discusses the ARK project. The topic changed to food habits where Fisher suspected that the only product Reed ever consumed was Miso when she fills her mug. Reed sat down at the table while listening to their conversation, now joined by Dorian Cronstedt, until Davis is injured by structure gel exploding out through a wall. Reed left the group when they hurried to the med-bay.

In Transmission #7, Reed is standing at an air-lock while watching Fisher beyond it, slowly dying of asphyxiation. Rogers and Cronstedt arrived and attempted to open the door, Rogers explained that the door was stumped, much like the med-bay door, and accused Reed. Cronstedt grabbed Reed and demanded to know what she had done. Reed bluntly stated that Fisher was preemptively dead and explained that opening the hatch would kill all of them. Later, Reed was sleeping in the command center. She dreamt of her time examining the Vivarium. Golaski, covered in structure gel as the role of a preliminary WAU-creature, woke her and explained that this was WAU's plan and that together they would change the world. Reed refused the offer and failed to reason with him so she was forced to stab him with a hardened piece of his new skin.

Reed woke once again, this time after the crash of the MS CURIE, in an air-lock. She approached Rogers and Hart, explaining that the three of them were the only ones. Fisher walked toward them in his Haimatsu Ductile Suit, appearing to have survived. After a brief conversation, Fisher killed Rogers then attacked Hart. Reed saved Hart by removing Fisher's helmet, causing him to collapse. Hart attempted to convince Reed to help her continue toward Theta but Reed managed to convince Hart that they were doomed. Reed told Hart that she would need her suit.

Reed walked the bottom floor of the sea to Site Upsilon. Having arrived, she leaves her helmet in the ventilation room and continues walking. At a terminal, she disabled the power production, which also disabled the ventilation turbines. Having carved a phrase in a wall, she says "I've shut down the power, WAU. I've killed us all." to the terminal screen then walks back to her helmet. Choosing not to wear it, she starts to suffocate to death while her self is seen visualized on the walls on a sunny day while embracing Golaski, along with other nice moments.

Reed indirectly appeared as a character after reaching the labs at Site Theta, where it was revealed that Reed's body was used as the basis for the Haimatsu Ductile Suit that is Jarrett's body. A standard Cortex Chip for robots, including the data reader and the Occu-Torch, has been forced through the skull and subsequently fused together with structure gel.

Baxter Rogers' accused Reed of having stumped the air-lock door which resulted in Martin Fisher's death. Rogers implies that the Reed also stumped the med-bay door, due to the similar situations of the door malfunctions. That has Reed indirectly responsible for the death of Jessica Davis, the delay of opening the door being crucial seconds wasted for Davis' medical attention. 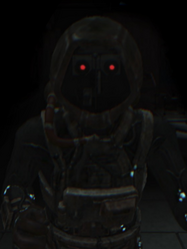 Reed's Haimatsu Ductile Suit with her still inside, under the control of Simon Jarrett.

Reed's nightmarish appearance on one of the player death slides.
Add a photo to this gallery 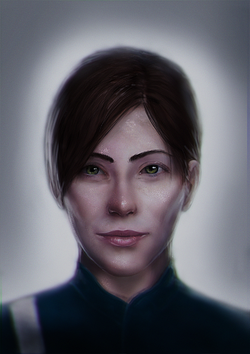 Reed, as she appears in Transmissions. 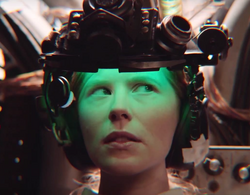 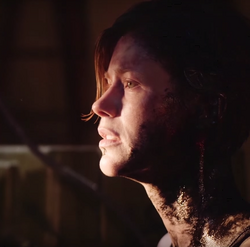 Reed preparing to shut down WAU.
Add a photo to this gallery

Retrieved from "https://soma.fandom.com/wiki/Imogen_Reed?oldid=17679"
Community content is available under CC-BY-SA unless otherwise noted.