“The sky is pitch black with smoke. The ocean is dark, incredibly dark. In the distance I can see land. According to navigation - it's Lisbon and the coast of Portugal.

It's on fire. Everything is on fire. The flames, they're reaching all the way into the sky. It's unreal. [...] Nothing but a massive firestorm covering the continent.”

―Crewmember Hopper of the MS CURIE[src]

The Impact Event, called The Apocalypse by many, was a cataclysmic event that occurred on Friday, January 12, 2103, at 05:13:00, when the Comet Telos collided with Earth, crashing into the Pacific Ocean.

The impact triggered firestorms in many areas on Earth with the Iberian Peninsula being severely affected. It ejected enormous amounts of dust and debris into the atmosphere, making it thick and difficult to operate in. Massive tsunamis inundated the coastlines of the Earth's continents. The impact rendered the surface of the Earth completely barren, killing all surface-dwelling life.

The impact caused the atmosphere to become heavily toxic and much warmer. Undersea life continued to thrive, however, including the humans stationed at PATHOS-II. Comet Telos initially decimated the populations of large aquatic species such as the humpback whale and the giant squid to near extinction. However, the humpback whale managed to survive and was observed by PATHOS-II staff after the impact event to be unaffected by the WAU, carrying on mammalian life on Earth.

Humans worldwide reacted differently to the impending disaster. At first, an effort to deflect Comet Telos was attempted via rocketry contributed by Earth's nations. However, these efforts failed in succession until the last attempt mere hours before the impact. Meanwhile some people fled to bomb shelters in mountainous areas such as Upstate New York, hoping to endure the Comet Telos impact. Many major cities worldwide were evacuated as urban centers were seen as more vulnerable to damage. Major corporations made an effort to preserve their assets and personnel, with those of Carthage and Haimatsu aboard PATHOS-II being relatively successful. Other people accepted the inevitability of death and extinction and spent the remaining time with their loved ones, or sent loving messages to those they could not reach.

The initial impact killed billions within the Pacific region and the fallout killed billions more over the next few days. The impact completely destroyed global communications, leaving the few pockets of survivors with little information as to the scope of the damage. PATHOS-II became the last known human settlement on Planet Earth. However, submersible vessels such as the MS CURIE managed to remain operational for some time after the impact. The CURIE was able to reach the coast of Portugal and photograph the extent of Comet Telos' wrath. However, an aftershock occurred after the Impact, likely destroying any remaining global transportation.

An pictogram of Comet Telos can be found in the files for the video on the tram in the Upsilon Shuttle Station. On the pictogram, the comet is called "2089 SO" (SO likely standing for Solar Object), meaning that it was likely for an older iteration of the story in which the comet was estimated to hit in 2089 rather than 2103.

"Telos" is a Greek word meaning "the end". It also means "goal" or "purpose" and is used in philosophical field of "teleology" which is the study of objects with regard to their aims, purposes or intentions. 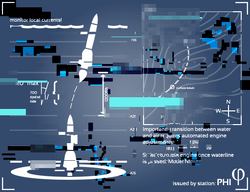 Details of the effort to deflect the comet. Note the early logo of Phi. 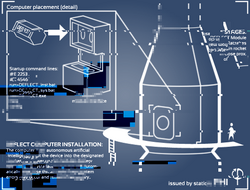 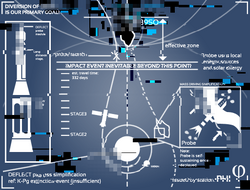 Ditto. This one also has the early Phi logo.

A photo of a fence along a dirt trail, with the skeleton of a horse in front of it.

A human skeleton lying against a concrete wall.

A massive tidal wave caused by the comet striking the ocean.

A destroyed city along an unknown coast side, possibly the same city as the one depicted in the tidal wave image.

A flaming city being destroyed by debris and firestorms from the comet.

The comet as it hits the surface.

The destroyed Earth seen in the post-credit scene of SOMA. 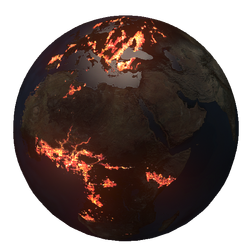 The model of the destroyed Earth itself, without all of the clouds covering it.
Retrieved from "https://soma.fandom.com/wiki/Impact_Event?oldid=17734"
Community content is available under CC-BY-SA unless otherwise noted.