John Strohmeier is a PATHOS-II Security Operative stationed at Theta. He is referenced on numerous occasions in SOMA.

Little is known about Strohmeier before his time on PATHOS-II, or what his life on PATHOS-II was like. As is evident from various notes and audio logs, Strohmeier took his job seriously, trying to keep Theta's crew members safe as best he could.

Although he initially supported it, Strohmeier was wary of Catherine Chun's ARK Project. After numerous suicides due to the "continuity" theory promoted by Mark Sarang. Strohmeier attempted to shut down the project with little success.

After six additional suicides, Strohmeier held a funeral for the crew members outside Theta and shut the project down indefinitely. This occurred before Catherine could scan Strohmeier, and as such his brain scan is not on the ARK.

On December 25, 2103, Catherine along with various crew members began a trek to Phi to launch the ARK. It's unknown how Strohmeier felt about this, but as he had little authority over the whole of PATHOS-II, he couldn't have done much about it.

Strohmeier met his fate in Theta's maintenance area after the arrival of Terry Akers on January 16, 2104 while attempting to evacuate the site with the rest of the surviving Theta personnel.

Strohmeier first appears as the narrator of Louise Meuron's Field Service Technician briefing video at Upsilon. He is also referenced on numerous occasions at Theta, and Simon Jarrett visits his office in the Theta laboratory to reformat a keycard.

Strohmeier's body can be found in Theta Maintenance in the room that unlocks after Terry Akers attacks Simon. Strohmeier is stuck in a comatose state and connected to the WAU. He seems to be dreaming about building a plane with someone named Doug.

John Strohmeier, as seen on the last slide of the Field Service Technician Briefing, which he presents. 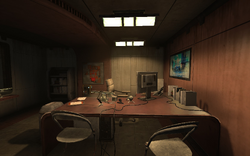 Strohmeier's "checklist" found inside his office at Theta.

Stromehier's comatose body found attached to the WAU in the Theta basement.
Add a photo to this gallery

Strohmeier Steam trading card artwork.
Add a photo to this gallery
Retrieved from "https://soma.fandom.com/wiki/John_Strohmeier?oldid=17615"
Community content is available under CC-BY-SA unless otherwise noted.