Julia Dahl is am Englander medical professional employed by Carthage Industries. She served on PATHOS-II, stationed at Omicron, although her title on PATHOS-II is unknown. In SOMA, her headless corpse can be found seated at a table in the canteen in front of her laptop.

On September 13, 2103, Dahl descends into the Abyss with engineer Alan Waldeck to assist with the evacuation of Tau. In her report, she says that they waited for Tau's staff to arrive for 140 minutes before they attempted to contact Tau. Dahl decides to walk toward Tau, thinking she will intercept the evacuees.

While travelling to the site she hears screaming on the short-range radio, leading her to discover the body of Field Worker Espinosa, almost cut in two by a large creature. She listens to Espinosa’s colleagues dying over the radio and decides to hurry back to the Climber, leaving the people at Tau to their fate.

Dahl’s second report on the Tau evacuation (labeled “Carth. Notes”), she states that Johan Ross managed to make it back to Tau in order to continue his work at Alpha. To avoid further disturbances Dahl decides to report the evacuation of Tau as a complete failure, hoping that it will stop Theta from attempting another one.

Sometime between December 27, 2103, when Ross was found in the Climber, and January 16, 2104, when Theta is attacked by proxies, the WAU overloads the blackboxes of Omicron's crew causing their heads to explode, killing every employee, including Dahl.

Simon Jarrett finds Dahl's headless body in the dining hall of Omicron, in front of a notebook which contains her voice records right before her head exploded.

The photo of a dark-haired woman in a lab coat found on Dahl's computer may be her, however the name of the photo itself in the files would indicate it's supposed to be Dr. Nadine Masters. 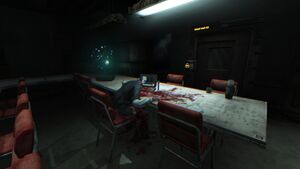 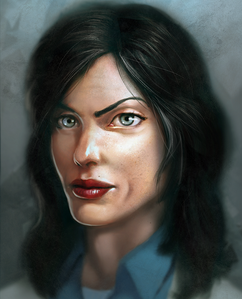 What may be either Julia Dahl or Dr. Nadine Masters.
Add a photo to this gallery
Retrieved from "https://soma.fandom.com/wiki/Julia_Dahl?oldid=17703"
Community content is available under CC-BY-SA unless otherwise noted.