The K8 (UH8) is a submersible robot in the Universal Helper Series; this specific model displays complex intelligence and is able to communicate via simplified sounds and lights.

Simon Jarrett first finds a UH8 trapped under several boulders en-route to the Upsilon complex from the Lambda complex. The Helper follows him until he reaches the door to the Upsilon shuttle station, where it proceeds to cut through the heavy seal in order to grant Simon access to the station.

The friendly Helper robot reappears at Site Delta following Simon's crash-landing after the CURIE explodes. After opening the jammed door to the escape vessel he crashed in, Simon recognizes the unit as the same one who had helped him access the shuttle station earlier; likewise, the UH8 recognizes Simon as its savior from the boulder pile. It follows him to and through Delta as he explores the complex, assisting him with opening any doors that have been rusted shut.

After successfully calling a Zeppelin, he is informed that a new tool chip is required to properly pilot the transport; Simon faces the hard decision of destroying either the friendly UH8 or the stray UH3 unit containing the active scan of Javid Goya. If Simon decides to destroy the UH3 in order to acquire its tool chip, the UH8 becomes afraid of him and will warily observe from a distance, fleeing when approached. Once Simon leaves the complex, the UH8 is left to roam. 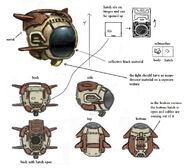 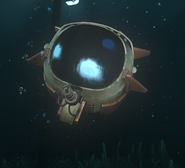 K8 in Game
Add a photo to this gallery
Retrieved from "https://soma.fandom.com/wiki/K8_(UH8)?oldid=16254"
Community content is available under CC-BY-SA unless otherwise noted.