“Lambda is PATHOS-II's shipping dock and transportation hub. There you will be able to find shuttle trains leading to all the other parts of the station, and transports to the surface.”
― Site Lambda; Slideshow Narrator[src]

Site Lambda is the Transport Terminal & Visitor Center of PATHOS-II.

At some point after the Impact Event, Lambda's crew was relocated to Site Theta. After that, Adam Golaski and Imogen Reed, both coming from Theta, went to Lambda as a salvage crew.

During their search for salvage, they discover an incapacitated UH-2 robot that introduces himself as Harry Halperin. Harry Halperin's implanted consciousness is the first known example of a Mockingbird created by the WAU. At first, the machine does not realize its current situation, believing that it is experiencing the ARK, but as it becomes frantic, the engineers deactivate the robot.

Davis is killed when structure gel pumps violently from a wall at high pressure, hitting her in the forehead like a bullet. She soon becomes reanimated, now bathed in structure gel, and showing signs of violent behavior towards Richard Holland. Holland ultimately incapacitates Davis after she attacks him. Suddenly, Adam Golaski, who has been secretly consuming structure gel, appears, now fully covered by the gel, and attacks Holland, killing him. Adam is restrained by the others and later abandoned and locked in a cargo bay.

By this point, structure gel was spreading through the site at an increasing rate, beginning with isolated small leaks, to the gel pouring from most of the station's walls until the point that site Lambda is on the verge of collapse because of the structure gel's pressure.

The group prepares to escape from Lambda under the command of Dorian Cronstedt. Vanessa Hart is assigned to bring the CURIE, but only manages to recover Haimatsu Ductile Suits for their escape on foot. While Hart is retrieving the suits, Reed is attacked by a partially mutated Adam Golaski but manages to kill him. Cronstedt is killed by the WAU. Martin Fisher's corpse is reanimated by structure gel and kills Baxter Rogers, but is stopped by Imogen Reed while he was attacking Vanessa Hart.

Reed moves to Upsilon's geothermal plant and shuts down the power, suffocating herself in the process. The WAU's battery reserves are initiated for 201 days. Vanessa is left as the sole survivor of the incidents in Lambda and walks back to Theta in a Haimatsu Ductile Suit, suffering only bruising and mild hypothermia.

In January 2103, a group of divers including Maggie Komorebi and Shawn Evans were sent to survey the area around Lambda. On January 15, they were recalled and sent by Peter Strasky to help Terry Akers relocate to Theta.

After arriving at the station under the advice of Catherine Chun, Simon Jarrett finds it almost completely abandoned and ransacked. Venturing further, he discovers Catherine, but is disappointed to find that she is not human, but rather a brain scan uploaded to a robot form, similar to the many other robots that he had encountered earlier. After helping Simon to understand the current situation, she instructs him to transfer her Cortex Chip into his Omnitool; it is from here that Catherine is able to direct Simon while overlooking his position in the station. Catherine informs Simon of the ARK project and asks him to determine the vessel's whereabouts. Before he leaves, Catherine warns Simon of the creature that damaged her robot body moments before he entered the room - a being referred to as a Flesher.

Evading the Flesher, Simon finds a terminal containing information about the ARK vessel, including its approximate location via a built-in tracer. Using the tracer, he finds that the ARK is currently situated in Site Tau, where it will only last a few decades at most, to Catherine's dismay. Hoping to create a new life for himself within the ARK, Simon offers to help Catherine reach it and complete her project. As per Catherine's suggestion, they both make a move toward site Theta to find the station's DUNBAT submersible, intending to use it to descend to the Abyss where Tau is situated.

Outside Lambda, Simon, and Catherine attempt to restart the nearby CURIE escape vessel to use for transport. After finding that the motor has been rendered non-functional, they make their way to the wreckage of the CURIE in search of a working vessel.

The Lambda Salvage Crew, initially consisting of Adam Golaski and Imogen Reed, was a team of up to eight people originally stationed at Theta who volunteered to scavenge the abandoned Site Lambda.

Vanessa Hart was the only member of the crew who was originally stationed at Lambda in the first place before being relocated to Theta after the Impact Event; along with this, she was also the sole survivor after the disastrous serious of events that occurred at Lambda as depicted in Transmissions. 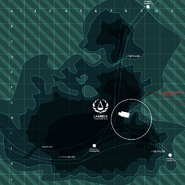 A map featuring Lambda and nearby transit routes.

Another map, showing a more detailed plan of the site, with some unseen areas.

A hallway in Lambda. The shuttle station is inaccessible.

Close-up shot of the outside of Lambda.

Ditto, from further away.

Ditto, from even further away.
Community content is available under CC-BY-SA unless otherwise noted.
Advertisement