The Leviathan is the largest enemy encountered in SOMA. The Leviathan appears to be a Giant Squid that is heavily mutated by the structure gel.

The Leviathan makes several harmless appearances throughout the Abyss before becoming a threat near the game's ending.

The Leviathan, according to a log, is a Giant Squid that has undergone heavy WAU mutation by structure gel leaks.[citation needed] The creature no longer resembles its former self, but instead looks like a giant worm.

Its mantle and tentacles are covered with plated growths, and it has many glowing blue WAU receptors on its body. In addition, where there once were only fins, the creature's front has now grown large mandibles. The creature has a single glowing red eye in the middle of its mouth.

Its body appears to be covered in human faces, locked in screaming poses, possibly due to the fact they were its previous victims and were fused with the creature, growing its size.

The Leviathan follows Simon Jarrett all the way to the Phi, swimming in close proximity to wherever Simon goes. It attempts to attack Simon if he wanders too far from any light sources. If caught, Simon is grabbed and brought back to a designated distance, sustaining a small amount of damage. Like the other mutated deep-sea creatures, the Leviathan avoids any light sources.

It is recommended to hide behind objects as Simon is heading from Alpha to Phi. When Simon is exiting Alpha, the Leviathan will attack regardless of illumination/proximity. Simon can charge all the way to the space gun, using WAU connection spots found through the journey to recover if attacked.

The Leviathan makes several harmless appearances in the Abyss, first just swimming past Simon and ignoring him, but later it attacks a robot helper Simon activates for light. Later, when Johan Ross tries to kill Simon in the heart of the WAU, the Leviathan breaks through the floor of the WAU facility and devours Ross before pursuing Simon to Phi, where it eventually breaks off its pursuit.

The leviathan may also be seen at the space gun sphere circling the outside. But due to the poor visibility, it may not be seen during a first playthrough, or just in general. 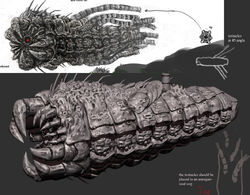