The MS CURIE is a semi-submersible research vessel featured in SOMA. The ship was used to bring resources and equipment from inland to PATHOS-II.

The CURIE has the unique ability to pitch itself 90 degrees in a vertical orientation while still being fully operational. The front end of the ship is intended to stick out the water while the remainder of it is submerged.

The exterior of the ship's hull is long and narrow, allowing it to operate as a pseudo-stationary platform while it is vertically upright.

Due to the nature of the CURIE's rotating hull, the interior of the ship compensates by having walkways, ladders and toilets adjacent to the upright structures. This allows the ship to be navigated while pitched.

The CURIE was initially created as a ship that could make runs between PATHOS-II and Lisbon, Portugal, as well as perform maintenance on Omega.

When the Impact Event occurred, the CURIE remained safe by submerging itself. In the aftermath the remainder of the crew began touring the Atlantic coasts to observe the desolation left by the comet's crash. They eventually tried returning to PATHOS-II but ultimately died (presumably from starvation or asphyxiation), leaving the CURIE floating on the surface of the ocean above Lambda.

Around December 18th, 2103, the members of the salvage crew sent to Lambda attempted to use the CURIE to leave the station when Lambda was on the verge of imploding. They were able to remotely draw it closer to the docking platform and were able to enter it.

Upon entering the CURIE they encountered an unspecified monster, forcing them to flee the ship and let it crash near the station. In the months that followed, the WAU was able to spread onto the shipwreck and stabilize its reactors.

Simon Jarrett discovers one of the CURIE's escape vessels outside Lambda before entering the complex to rescue Catherine Chun. Soon after transferring Catherine to the Omnitool, he makes his way back to the CURIE with the intention of using the ship to travel to Theta. The vehicle is damaged beyond repair, but Catherine suggests that the ship's wreckage may still contain a functional escape vessel.

After a lengthy hike across the ocean floor, Simon locates the wreckage of the CURIE. Climbing inside, he discovers that the vessel's reactor and a few of its terminals are being kept stable and active by the WAU, despite the ship's extended exposure to the sea. As a result, the safety locks are still in place and Simon cannot release any of the remaining escape vessels without first disabling the core.

While Simon attempts to reach the reactor chamber he is ruthlessly pursued by a Flesher which roams the halls of the CURIE. He eventually reaches the chamber and destabilizes the reactor core, disengaging the safety locks. This triggers a reactor meltdown, causing the ship to inevitably self-destruct.

Simon quickly returns to the escape vessel and Catherine begins piloting it away from the CURIE. The reactor detonates soon after the escape vessel launches, with the resulting shock waves forcing the vessel off course, causing them to crash into the plateau of Delta. 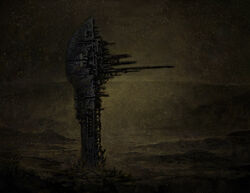 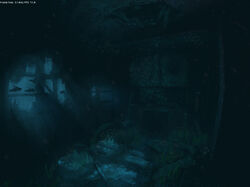 Paintover of the interior. 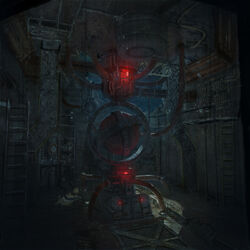 The reactor core.
Add a photo to this gallery 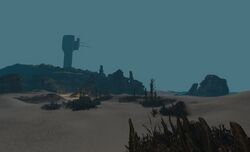 An early underwater map, with the CURIE in the background. 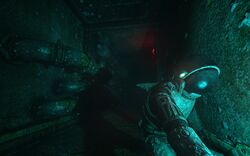 A Flesher inside the ship. 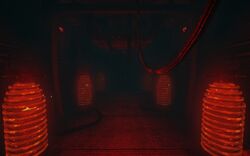 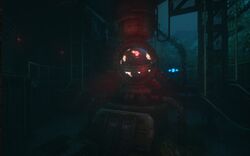 The fusion reactor.
Add a photo to this gallery 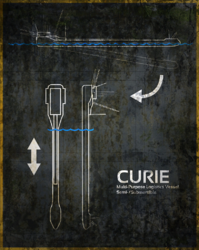 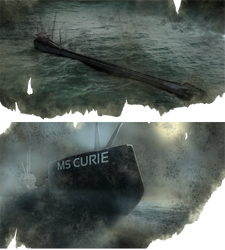 A grimy Carthage Industries poster, found in the CURIE.
Add a photo to this gallery
Retrieved from "https://soma.fandom.com/wiki/MS_CURIE?oldid=15169"
Community content is available under CC-BY-SA unless otherwise noted.