Most Mockingbirds are not humanoid, and the dissonance between the Mockingbird's form and the crew member's mind usually sends the crew member into a catatonic or otherwise insane state, often unaware that they are inside a robot.

In Item #4017 is described the encounter between Adam Golaski and his own Mockingbird.

At Lambda, Catherine Chun's brain scan is found initially uploaded into a robot unit. She has Simon Jarrett take her Cortex Chip and attach it to an Omnitool.

At Upsilon, the Mockingbird of Carl Semken can be found stuck on a conveyor belt. It is delusional in its belief that it is human. Simon Jarrett can not convince it and repeated attempts frustrate it. The Mockingbird will wail in agony if the power breaker is flipped as power courses through it.

In Transmission #1, while venturing through Upsilon, Adam Golaski finds the Mockingbird of Harry Halperin, supposedly a former co-worker from Omicron. However, there is no Harry Halperin stationed at Omicron, only Jacob Halperin. The only explanation for this is that Harry is a nickname for Jacob Halperin, otherwise this moment is not canon.

At Delta, Simon finds a UH3 which harbors the brain scan of Javid Goya. It is completely delusional, not directly acknowledging Simon Jarrett's presence and believing that he is merely remotely controlling the universal helper using the pilot system.

In Transmission #7, the Mockingbird of Lissa Golaski is revealed. Possibly the most unique and identical Mockingbird; it features the near-literal image of Lissa, the only differences being some structure gel on its cheek and larger mechanical components moving in tandem with it, behind it.

Seemingly lacking a brain scan totally, as Lissa was never present on PATHOS-II, limited vox recordings allow for the mimicking of Lissa. This caused unbelievable behavior, such as stuttering or incomprehensible sentences.

At Theta's entrance, Simon Jarrett can find Robin Bass' Mockingbird. It believes that it is inside of the ARK but is perplexed that there aren't any other people, though it enjoyed meeting Simon. It expresses concern at the possibility that it may not be in the ARK. Simon doesn't have the heart to tell it that it isn't. She panics if her power source is removed but then deactivates.

At Upsilon, Simon Jarrett finds a Mockingbird feeding off energy from a control board. When Simon disconnects it, the Mockingbird begins pleading with him to reconnect it before dying. This Mockingbird can be identified as Vigdis Jonsdottir who was the dispatcher at Upsilon. 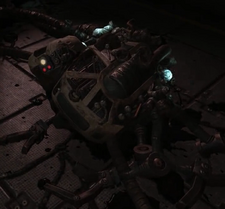 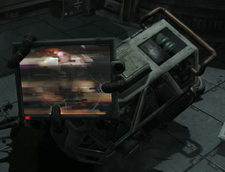 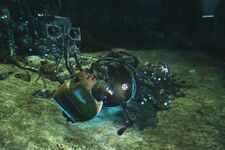 Adam Golaski has a conversation with his Mockingbird.