On August 9th, 2103, Dr. Masters was scanned for the ARK project

On November 1, 2103, John Strohmeier asks Dr. Masters to give Dr. Catherine Chun a psychiatric evaluation. Dr. Masters’ evaluation of Catherine describes her as being “weak in character, the perfect victim to be domineered and pushed around by others”.

On December 20, 2103, Dr. Masters wrote a report after examining Vanessa Hart, stating that she appears to be in good shape, with only bruises and mild hypothermia caused by the long walk. Dr. Masters also mentions that It’s difficult to corroborate her story as she is the only member of the Lambda Salvage Crew to return from Lambda.

Once Terry Akers managed to take over Maggie Komorebi’s team's zeppelin, he arrived at Theta on January 16, 2104 unconscious and in a poor condition. While Theta's crew was unaware of the events that took place in Delta, Akers is brought to the infirmary to be examined by Dr. Masters.

While examining Akers, Dr. Masters records herself discussing his condition. She brings to light that he has apparently been consuming large quantities of structure gel. Although small doses may be harmless, she notes how the large quantity consumed by Akers may be mutating his body and seemingly his attitude also considering he was missing his own eyes. Dr. Masters also predicts malign cell mutations because of the gel's mutative qualities. She plans to consult Dr. Eames at Omicron.

While Dr. Masters is typing up this medical report, she was abruptly attacked by Akers, who connected her to the WAU in order to keep her alive artificially.

In Theta maintenance, her breathing body can be found in her office, still in front of her computer, connected to the WAU. She appears to have the back of her skull broken open.

A trail of blood can be found from the examination table Akers was placed on to the chair in Dr. Masters' office, leading to the assumption that Akers was the one who attached her to the WAU. 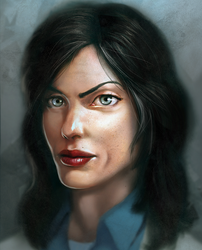 The photo found on Julia Dahl's computer, which according to the file name is Dr. Masters. As such, it may be either Dr. Masters or Julia Dahl.

Nadine's body in her office. Note the blood trail left by Akers.
Add a photo to this gallery
Retrieved from "https://soma.fandom.com/wiki/Nadine_Masters?oldid=17492"
Community content is available under CC-BY-SA unless otherwise noted.