When Tau's evacuation towards Omicron was ordered on September 13th, 2103, its staff failed to reach the climber due to being attacked by Structure Gel-infused marine life under the WAU 's influence, resulting in loss of radio contact with Omicron. Many employees were killed during the failed evacuation attempt, but Tsiolkovsky was one of the survivors who remained stranded at Tau.

On December 25, 2103, a party from Theta, carrying the ARK , arrive in Tau, where they are joined by Neil Tsiolkovsky but, along their way to Phi , Tsiolkovsky ends up dying in a landslide.

Kovsky's body can be found by Simon Jarrett under a pile of wreckage in the tunnel linking Tau to Phi and his blackbox can be read.

In Item #4540 it's mentioned that Tsiolkovsky, foreshadowing his own fate, used to say that being buried alive would be a better way of dying for the people at Tau since, in a situation of drowning in the Abyss, a glimpse of light could instigate a futile and persistent struggle for survival instead of accepting a peaceful death. 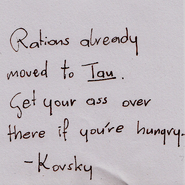 A note from Tsiolkovksy found at Phi, stating that the rations have been relocated to Tau.
Add a photo to this gallery
Retrieved from "https://soma.fandom.com/wiki/Neil_Tsiolkovsky?oldid=17502"
Community content is available under CC-BY-SA unless otherwise noted.