Nicolai Ivashkin (Николай Ивашкин) is a Russian PATHOS-II System Architect stationed at Theta. In SOMA, he was a member of the crew helping Dr. Catherine Chun carry the ARK to Phi.

Nicolai later decides to join the ARK team along with Ian Pedersen, Catherine Chun, Sarah Lindwall and Jasper Hill. On December 25, 2103, the team left Theta and headed for Omicron with the goal of completing the ARK project by launching it into space with the Omega Space Gun.

After the conflict resulting in the death of Catherine Chun at Phi, on December 27, 2103, Nicolai retired to Steve Glasser and Jin Yoshida's room at Tau, where he eventually succumbed to starvation while clutching a photo of his son, Alexei Ivashkin. The WAU then invaded his body and brought him back to a semi-living state.

Nicolai's scan for the ARK was done on July 5th, 2103. This would have made him the first person that Catherine would have scanned after herself.

When Simon Jarrett encounters Nicolai's corpse at Tau, he can be heard wheezing the name of his loved ones. "Alexei" is one.

Nicolai as he appears in Tau. 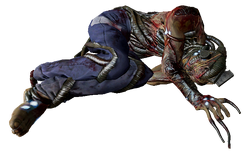 Model render of Nicolai, in his comatose state.

A photograph of the ARK team at Theta, including Nicolai.

A similar photograph of the ARK team at Omicron each in a Haimatsu Power Suit.
Add a photo to this gallery
Retrieved from "https://soma.fandom.com/wiki/Nicolai_Ivashkin?oldid=17731"
Community content is available under CC-BY-SA unless otherwise noted.