“Okay, so this is the Omega Sector, it's about an acre of the abyssal plain used by PATHOS-II. I expect we'll have to do some walking before we reach Tau.”

The Omega Sector is a region of the abyssal plain located in the North Atlantic Ocean near the Mid-Atlantic Ridge owned and operated by PATHOS-II. It is found at depths below 4,000 meters, being the lowest point of elevation across the entirety of PATHOS-II. The abyss is too deep for sunlight to reach, causing the location to remain in perpetual darkness. The pressure at these depths is overwhelming, reaching several hundred atmospheres in magnitude.

Many of the creatures in the abyss are therefore blind or are capable of producing their own light through bioluminescence. Due to the lack of sunlight, plankton cannot survive at these depths, resulting in many abyssal creatures being predatory carnivores with large teeth. The anglerfish is one such example, using its bioluminscent illicium to lure in unsuspecting prey. Following the comet's impact, the WAU has heavily mutated much of the Abyss' wildlife through Structure Gel leakage, causing them to be extremely territorial and aggressive toward anything, including people. However, the WAU's mutations have also rendered them averse to bright light, allowing divers in the Abyss to stay safe as long as they stay near a light source.

PATHOS-II has established several installations in the Abyss, primarily Site Tau and Site Phi, both of which provide supporting functions for the Omega Space Gun. These sites are primarily accessed via the Climber, an elevator located at Site Omicron on the very edge of the undersea plateau overlooking the Abyss. A Haimatsu Power Suit is necessary to survive the Abyss, as an ordinary Haimatsu Ductile Suit lack the necessary protection against the immense pressure. Specialized submersibles like the DUNBAT are constructed to withstand the pressure of the Abyss, and can also be used to reach these facilities.

The section of the Abyss used by PATHOS-II appears to be located near a fault line, with geological activity causing turbulent currents that make traversing the Abyss by foot difficult and extremely dangerous. For this reason, a trail of lights has been constructed between the Climber and Tau, which have the twofold function of guiding travelers between the sites, and warding off the fauna of the Abyss, which have been made far more aggressive and territorial by the WAU's influence.

Unbeknownst to most of PATHOS-II's staff, the Abyss also contains Site Alpha, the complex containing the WAU's central core.

After acquiring a Haimatsu Power Suit from Omicron and descending to the Abyss in a Climber, Simon Jarrett makes his way through the dark depths to Tau, following the blue lights that have been erected to guide personnel through the seabed. While traversing the Abyss, he learns through datamining corpses and comm terminals both about Tau's failed evacuation to Omicron, and the struggles of the ARK team in delivering the ARK to Tau. Halfway there, a heavy storm brews, bringing strong currents in Simon's direction and further limiting his visibility; he takes cover from the storm and the mutated marine life within several shipping crates, all the while still following the lights. Continuing on, he evades several shoals of small anglerfish as well as the Viperfish, crosses a tunnel full of sea spiders and ducks from the Leviathan before arriving at the entrance of Tau, taking shelter inside.

Concept art of a black smoker plant.
Add a photo to this gallery 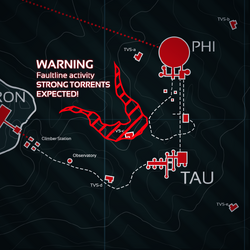 Map of the Abyss.
Add a photo to this gallery
Retrieved from "https://soma.fandom.com/wiki/Omega_Sector?oldid=15758"
Community content is available under CC-BY-SA unless otherwise noted.