The Omega Space Gun is a colossal electromagnetic mass driver located at Phi, used to safely launch spacecraft into Earth orbit. The space gun was developed as an alternative to rocket technology, with the intent of making space launches safer and less expensive.

The gun uses electromagnets to accelerate projectiles, loaded into metal "bullets," to extreme velocities. Once in space, the spacecraft is jettisoned from its bullet and uses its onboard thrusters to adjust its trajectory into the desired orbit. Like many other machines in PATHOS-II, the space gun is operated from a Pilot Seat, allowing a user to remotely control the crane used to load projectiles into the gun, and to begin the gun's firing sequence.

The gun is approximately 7,290 meters long, the length of its barrel running from the ocean floor in the Omega Sector to Omega, a communications station at the ocean surface. It can shoot a maximum payload of 10 tonnes at a top speed of 42000 km/h.

After the Impact Event destroyed the Earth's surface, a small group of PATHOS-II's staff, having developed the ARK as the last hope for humanity's survival, take it to the gun to launch it into interplanetary space. However, a disagreement between Catherine Chun and the others ends with her accidentally being killed in the resulting struggle, forcing the others to retreat to Tau and postpone the launch until a later date.

Simon arrives in Phi, On May 11, 2104 and fires the Omega Space Gun, successfully launching the ARK into space.

Schematics of the space gun. 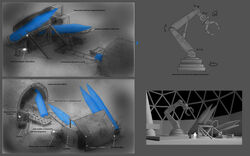 General view of the launch dome.
Add a photo to this gallery

A payload bullet with its hatch semi-opened.

Statistics
Add a photo to this gallery
Retrieved from "https://soma.fandom.com/wiki/Omega_Space_Gun?oldid=16507"
Community content is available under CC-BY-SA unless otherwise noted.