“We're all dying anyway. I'm all in. I put my faith in Sarang and the continuity.”

―Robin Bass, making mention of Mark Sarang and his "continuity" belief process in her suicide note.[src]

Robin Bass is a D.C. American engineer who was a Field Service Technician on PATHOS-II, stationed at Theta. In SOMA, she was a believer in "continuity", committing suicide.

Robin Bass committed suicide right after her brain scan on August 26, 2103, due to the "continuity" belief proposed by her colleague Mark Sarang, to ensure that her own self lived on within the ARK.

Near Theta's entrance, Simon Jarrett finds a mockingbird containing Robin's brain scan. The robot is in poor condition. Unaware of her real status, Robin explains that she committed suicide after her brain scan, and now believes herself to be living in the virtual reality of the ARK. Simon decides to maintain her illusion and conceals the truth of her current state.

Simon is then given the option to shut down the robot by unplugging the cable that feeds it with energy.

Inside Theta, Simon can explore Robin's living quarters, where he discovers that she committed suicide by cutting her wrist with a straight razor. 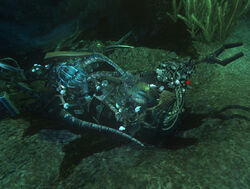 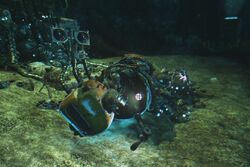 Robin's room inside of Theta. 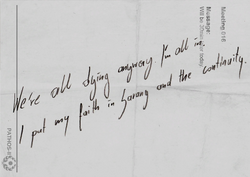 Robin's suicide note.
Add a photo to this gallery
Retrieved from "https://soma.fandom.com/wiki/Robin_Bass?oldid=17518"
Community content is available under CC-BY-SA unless otherwise noted.