Start a Wiki
Robot Head, or Robot Girl, is an antagonist Simon Jarrett encounters at Omicron.

The Robot Girl is a feminine enemy consisting of a woman's corpse fused with implants formed from Structure Gel. She possesses mechanical eyes, an artificial neck securing the head to the body, a prosthetic left foot, and a pincer replacing the right hand. All of these implants seemingly react to her level of aggression, as they light up when she detects something or becomes aggravated.

The Robot Girl appears to exist in a state of constant distress, crying constantly whilst idle. She is also capable of distorted vocalization, as can be heard when she is alerted.

The Robot Girl remains passive unless provoked. When alerted, various incandescent lights on her body will begin glowing and she will start snapping her pincer open and closed. If not provoked any further, she will settle down after a few seconds, cover her face with her hands again and resume crying.

The Robot Girl can be alerted by nearby movement from the player and by sound. Light from Simon's flashlight does not appear to alert it, but the sound when turning it on and off will.

If the robot girl enters her aggravated state and Simon remains completely still she will return to her weeping/idle state. This means Simon can quite safely inch his way towards and around her with minimal trouble.

If she does give chase, she will not be distracted by throwing around props to generate sounds, and will attempt to reach Simon and knock him unconscious before returning to her passive state.

One or possibly two Robot Girls are encountered in Omicron while Simon is attempting to find the parts to repair Raleigh Herber's Haimatsu Power Suit.

After Simon has collected all three required objects and makes his way back to the diving room, a Robot Girl is standing in the infirmary. She is identical and behaves the same way as the other one, and again it is possible to sneak past her. Even if Simon doesn't provoke her, she nevertheless starts to chase him as soon as he enters the long hallway between the infirmary and the diving room.

Upon reaching the diving room Simon frantically calls for Catherine Chun to shut the door behind him. The door is sealed, leaving the Robot Girl banging on the door from the outside.

According to concept art, the Robot Girl was originally supposed to have an organic right eye as opposed to the mechanical one.

Concept art.
Add a photo to this gallery 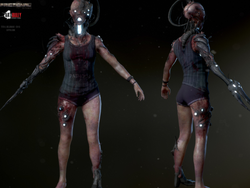 Model of the Robot Girl.
Add a photo to this gallery
Retrieved from "https://soma.fandom.com/wiki/Robot_Head?oldid=16087"
Community content is available under CC-BY-SA unless otherwise noted.