SOMA is a survival horror video game game developed by Frictional Games. It was released on September 22, 2015. Its title originates from the Greek word σῶμα (soma) which refers to the body, specifically the body as distinct from the mind or the soul.

The radio has gone silent on PATHOS-II. As isolation bears down on the staff of the remote research facility, strange things are happening.

Machines are taking on human traits and alien constructions have started to interfere with routine. The world around them is turning into a nightmare.

The only way out is to do something unimaginable.

The main protagonist of SOMA is Simon Jarrett, who, prior to the events of the game, was in a fatal car crash that killed his friend and passenger Ashley Hall. Simon survived the incident but was left with permanent brain damage. Because of the lingering effects of the crash, Simon agrees to an experimental treatment involving a brain scan.

The game begins after a brief cut-scene in which Simon has a nightmare of the aforementioned crash. He wakes up in his apartment and receives a phone call from David Munshi, who reminds him that he has to drink Tracer Fluid before the scan. After locating and taking the fluid, he departs for PACE Laboratories.

He discovers an office closed for remodeling, with no one at the front desk. After locating the combination for the locked back-door in a journal, he meets with David Munshi, who reassures Simon that the scan will feel about as uncomfortable as "having your picture taken."

As Simon's brain is scanned, there is a bright flash, and Simon suddenly wakes up in PATHOS-II, at a site called Upsilon, without any idea of how he was transported there or what is going on. Simon manages to find an Omnitool and eventually comes into radio contact a woman named Catherine Chun, who tells him to come to site Lambda and meet with her.

It quickly becomes apparent that PATHOS-II is an underwater facility in serious disarray. The walls are slowly being covered by a black, seemingly organic substance, that sprawls across the entirety of PATHOS-II, as parts of the facility are blocked off and destroyed by it. There are no signs of any normal, living humans, though Simon does encounter a few robots who believe that they are human, as well as other robots that act as some of the protagonists of the game.

Before Simon reaches Catherine upon arriving at site Lambda, she is heavily injured by a humanoid creature. Simon then discovers that Catherine is not human, but a scan of a human consciousness placed into a robot's body. She then reveals that Simon himself is also not human, but a Cortex Chip implanted in a dead woman's body, Imogen Reed, wearing a Haimatsu Ductile Suit, and that the "original" Simon has been dead for a hundred years. When Simon got his brain scanned by Munshi, a copy of his consciousness was saved to the computer. This allowed Munshi to narrow down a treatment plan for his neurological condition.

Simon's brain scan, being one of the first, became widely distributed among other medical professionals and students for learning and experimentation. Simon's copy had somehow become mysteriously activated on PATHOS-II.

It is also revealed that the surface of the Earth was recently struck by a comet, devastating the planet and killing all life on the surface. PATHOS-II was the only place where humans survived the comet's impact. But the facility was heavily damaged and the crew realized they only had months to live themselves.

Catherine soon asks Simon to transfer her into his Omnitool. She then enlists his help in finishing her life's work: The launching of the ARK, a simulated reality for a collection of human brain scans. Launched into orbit by PATHOS-II's Omega Space Gun and powered by solar panels, it would safeguard humanity's last remnants for thousands of years. Catherine's "original" self scanned many PATHOS-II crew members into the ARK. But the project was permanently suspended when, despite her best efforts, several crew members killed themselves after being scanned to ensure the only true copy of themselves left was on the ARK itself.

Catherine then attempted to take the ARK down to the Space Gun, but there were complications and the launch never occurred. The ARK currently resides in site Tau, a PATHOS-II facility at the bottom of a deep chasm called the Abyss.

Together, Simon and Catherine struggle through the ruined facilities of PATHOS-II, with underwater hikes between each site, and numerous hostile creatures attempting to stop them from proceeding. Simon gradually realizes the black organic growth that has consumed the facility is PATHOS-II's artificial intelligence, the WAU. It was docile until the comet hit, at which point it began harnessing vast amounts of structure gel and expanding into every part of PATHOS-II, assimilating humans both dead and alive. It forcefully keeps live humans from dying and has been reanimating human corpses. The WAU has also uploaded many of the PATHOS-II's brain scans into machines, where they don't realize what has happened and think they're still human.

Recently, it has begun fusing flesh and metal together, creating hideous and insane creatures that roam PATHOS-II. It is revealed that Simon himself was created and awoken by the WAU. Ultimately, the WAU perceives that the best way to save humanity is to create shells for human consciousness to live, regardless of the potential consequences.

Catherine's original plan was to commandeer a deep sea submarine stored in Theta, the DUNBAT, to lead them down to the Abyss. However, the plan fails when they realize the WAU has taken over the sub and implanted a human scan into it. The sub wakes up as it's powered on and, confused and terrified, thrashes free of its dock and disappears into the depths.

Catherine then suggests that they take the Abyss Climber Rig down to the Abyss, but in order to survive the crushing depths, they need to find Simon a tougher suit. In Omicron, they are able to locate a Haimatsu Power Suit with the headless body of Raleigh Herber inside. Catherine proposes they scan Simon's consciousness into a new Cortex Chip to be placed into the corpse, imitating the process that the WAU used. With no other clear path forward, Simon reluctantly agrees. They find a pilot seat that can be used to transfer Simon into the Haimatsu Power Suit, and successfully "transfer" Simon's consciousness into the suit. However, Simon is enraged to find his old body still alive and unconscious in the pilot seat. Catherine explains there is no way to move a scan from one body to another, and that it can only be copied. Simon is then given the choice of whether to kill his old self or leave him to wake up in a few days.

While riding the Climber down into the Abyss, Simon remarks that both himself and the other Simon remaining in Omicron could equally claim to be the "right Simon", and that it was a matter of chance, a coin flip that he is the version that continued the journey. During the descent, the Climber is then ambushed by a former PATHOS-II member, Johan Ross. He appears to be greatly mutated from contact with structure gel. Ross is excited that they've made it this far and promises to make "preparations" before hurling himself down into the Abyss.

Simon then struggles through pitch black water, fast-flowing currents, and vicious sea creatures before finally making it to site Tau. Inside, after he makes his way to a survivor while avoiding one of the WAU's hostile creatures, he finds the ARK being guarded by the last living human on the planet named Sarah Lindwall. She is barely alive, food had run out in site Tau long ago. Sarah had survived with the help of a life support machine. Sarah grants Simon permission to take the ARK, but also requests that he disconnect her from her life support and let her die. The player can choose whether or not to end her life before proceeding.

While following the ARK to site Phi, Simon's journey is hijacked by Ross, who leads him to a secret facility, site Alpha, where the "heart" of the WAU is located. Ross reveals that Simon's suit contains specially modified structure gel that can kill the WAU. Ross insists that the creatures the WAU is creating are not truly human and it's better to end all of this misery. The player has the choice of whether to kill the WAU or not. No matter what the player chooses, the Leviathan attacks Ross from beneath, presumably killing him. It starts to chase Simon but he manages to escape and complete the short journey to site Phi. Having finally made it, he locates the Omega Space Gun.

However, before loading the ARK into the Space Gun, Simon discovers the body of Catherine Chun, who was killed in a heated argument about whether to launch the ARK or safeguard it at PATHOS-II. Simon finishes loading the Space Gun, he and Catherine simultaneously trigger the countdown and start scanning themselves into the ARK.

However, after a bright flash, Simon is stunned to wake up in the same launch chair, with the ARK long gone into space. Catherine also wakes, still trapped in the Omnitool. As Simon yells at Catherine for an explanation, she again insists that one's consciousness cannot be moved, only copied, and that this time they both "lost the coin toss". In the middle of their argument, Catherine's critical systems fail, leaving Simon stranded with a broken Omnitool at the bottom of the sea alone, leaving his fate unclear, while the emergency alarm slowly fades off into the credit screen.

In a post credits scene, the Simon copied to the ARK wakes up in an idyllic landscape, unaware of the fate of his other version left behind at the Space Gun. He takes a short survey that is tailored to gather information on the user's current experience and status. Simon reunites with Catherine in front of a futuristic island city. Meanwhile, it is shown that the ARK successfully makes it into space as it leaves behind a devastated Earth, ending the game.

SOMA received "generally favorable reviews", according to review aggregator Metacritic, scoring the game 84/100 for PC[1] and 79/100 for PS4 versions.[2] Caitlin Cooke from Destructoid said that "SOMA gets everything right about the survival horror genre. It’s like someone created the perfect video game mixtape", [3] while the community on Slant agreed that the game offered an unsettling, thought-provoking story, that helped create a dreary and anxious atmosphere.[4] 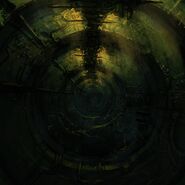 A simplified version of the SOMA logo. 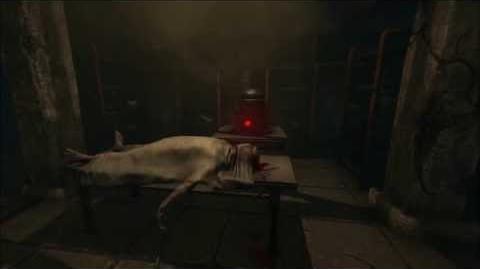