The Shuttle Transport system is an interconnected railway system in which most of the sites within PATHOS-II (Upsilon, Lambda, Delta, Theta, Omicron, with the only exception of Tau and Phi which railways are to be constructed) are connected via a shuttle train.

Simon Jarrett uses one of the trains to travel from Upsilon to Lambda, even though it crashes. It can crash due to power failure or due to the track being blocked (depending on how the player decided Amy Azzaro's fate).

Amy Azzaro tries to use one of the shuttles to go to Theta, but an unspecified accident happens, leaving her to be integrated with the WAU. Alice Koster's body can be found inside of the shuttle train inside the basement of Theta. 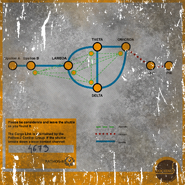 Transit scheme as seen inside a train.
Add a photo to this gallery
Retrieved from "https://soma.fandom.com/wiki/Shuttle_Transport?oldid=14707"
Community content is available under CC-BY-SA unless otherwise noted.