Simon's Apartment is the residency of Simon Jarrett, located in an apartment building on 47 McCaul Street in Toronto, Ontario M5T 2W7, Canada. It is where SOMA's intro takes place. It consists of a studio flat, which combines living room, bedroom and kitchenette into a single room.

Simon Jarrett's apartment is where the game starts at. It consists of a studio apartment, with a touchscreen laptop along with other electronics, littered with pizza boxes and fast food packaging.

Personal items can be found around the apartment, including a photo of Simon and his girlfriend Ashley Hall along with various other photos taken by Simon, two stickers on the window with The Grimoire logo and a bleeding smiley face, and a movie magazine, among other items.

There are also a couple of posters decorating the walls of the apartment, the most notable being a poster for the fictional Toronto Festival of Literature.

On May 2, 2015, Saturday, Simon Jarrett wakes up from a bad dream to his phone ringing. The bad dream being about the car accident that involved him and his friend Ashley Hall, which resulted in SImon's permanent brain injuries and Ashley's death.

He checks his cellphone which shows the time, 9:21, and answers a call from David Munshi that reminds him to drink the tracer fluid, Gadutan-755, to help capture better images of his brain damages during the brain scan.

After taking the tracer fluid, Simon leaves his apartment and proceeds to PACE Laboratories by subway.

Later at Theta, Simon is caught by Terry Akers and briefly experiences a WAU-induced dream state where he talks to Ashley in his apartment, where she talks about them being married, before he wakes up.

View of the apartment living area and the door to the bathroom.

Ditto, except of Simon's bed as well as the apartment kitchen and entrance. 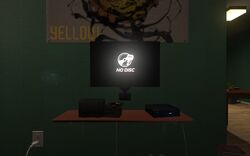 Simon sitting in front of his TV.
Retrieved from "https://soma.fandom.com/wiki/Simon%27s_Apartment?oldid=17741"
Community content is available under CC-BY-SA unless otherwise noted.