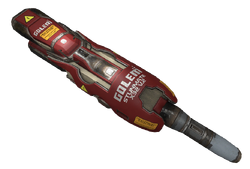 The Golem Stunmate X32 V.2, also known simply as the Stun Baton or Stun Rod, is an incapacitating weapon manufactured by Golem and used by PATHOS-II staff to protect themselves from the ocean wildlife.

The Stun Baton is located in a lockbox on Zeppelin #049. After the box is unlocked, Simon Jarrett can pick up the Stun Baton, intending to use it on a robot to get a Cortex Chip.

Without any other options, Simon is forced to shock either a UH8 that has helped him several times before such as opening sealed doors, or a UH3 model uploaded with the brain scan of Javid Goya, who remains unaware of his current state.

After shocking one of the two, Simon will discard the Stun Baton on the ground. 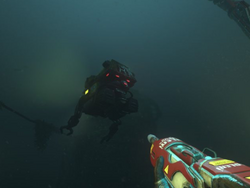 Simon with the stun baton ready to take down a UH3.

A sideview of the stun baton.
Add a photo to this gallery
Retrieved from "https://soma.fandom.com/wiki/Stun_Baton?oldid=14749"
Community content is available under CC-BY-SA unless otherwise noted.