Vigdis Jonsdottir (Vigdís Jónsdóttir), commonly known by her nickname Jonsy, is an Icelander communications operator who served as the Dispatcher on PATHOS-II at Upsilon.

Before the evacuation in Upsilon, she was sent 4 different letters from New York, Lisbon, London and Cadiz about the surface being unable to keep contact with Pathos II due to the comet about to crash into the earth. Jonsy and the rest of the Upsilon crew (with the exception of Carl Semken and Amy Azzaro) relocate to Theta shortly after the Impact Event .

While at Theta, Jonsy's brain scan is completed by Catherine Chun on August 31st, 2103.

On January 16, 2104, Theta is taken over by Terry Akers and the Proxies. Jonsy and a small team of Theta employees manage to escape Theta and end up outside of Omicron. The crew is unable to find a way inside, due to Omicron being quarantined.

While trying to see if she's okay, Emma Alvaro described Jonsy as the "Strong silent type." Trying to get Jonsy to say something, she slowly realizes that Jonsy is succumbing to injuries sustained by the escape from Akers.

Jonsy's body can be found outside of the Omicron entrance. Simon Jarrett can datamine her blackbox to listen to her final moments. 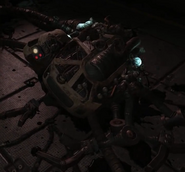 Vigdis Jonsdottir's Mockingbird's last moments as the power drains.
Add a photo to this gallery
Retrieved from "https://soma.fandom.com/wiki/Vigdis_Jonsdottir?oldid=17637"
Community content is available under CC-BY-SA unless otherwise noted.