“The WAU is reaching out to every machine, every life form, to manipulate, to control. It's trying to help, save its creators from all this, just like the protocol demands. But really, what is good enough?

Where is the line drawn for what is human and what is not? Would walking corpses do? Would a group of machines thinking they're human be acceptable? We can't trust a machine to know, to understand what it means to be.” 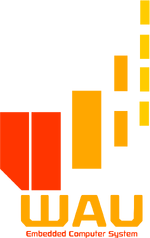 The WAU is an embedded computer system (as advertised on its logo), a sort of artificial general intelligence, constructed by Carthage Industries with the intent of overseeing maintenance across all PATHOS-II facilities, with Dr. Johan Ross being its primary overseer and operator. It acts as the main antagonist of SOMA and Transmissions.

The WAU is a biologically engineered computer system located within the Core Isolation Laboratory of Alpha, being a sphere made of white organic matter suspended in the air by a chandelier, holding the sphere through four prongs that are embedded into the top of the sphere. Inside the Core Isolation Laboratory the WAU is in the middle of another chandelier that's holding three large needles connected to a computer system, allowing for the WAU to be modified directly through precise injections that change its biological code. After what was presumably an injection of structure gel, the WAU started forming a dark circular opening ringed with a fleshy membrane, which would later form into what can be described as a mouth.

As the WAU advanced with the dose of structure gel it was given, a rotten texture spread all across its form from the area it was injected as it began distributing structure gel at a rapid rate. The excess amount of structure gel accumulating inside the WAU itself eventually overbearing the system its suspended by, shattering it and causing the WAU to fall onto the floor in the middle of the Core Isolation Laboratory. The structure gel surrounding it hardened, forming ebony scales protecting the WAU and bulging, tumorous growths around it.

Lacking a proper definition of the human condition or an acceptable mode of human existence, the WAU uploaded brain scans of PATHOS-II employees to robots throughout the station, creating Mockingbirds. Humans infected with the Structure Gel were bio-mechanically engineered and put in trance-like comas, unaware of their surroundings and what was happening to them.

The WAU is responsible for the creation of the various enemies that Simon Jarrett faces throughout the game. It is capable of manipulating structure gel and interfering with blackboxes as well as creating life support systems for injured workers. Although Simon, Catherine and Dr. Ross have been designed or extensively modified by the WAU, it does not appear to control them in any way.

On March 7, 2102, Mark Sarang received a classified message from the supervisory board of Carthage Industries who were “very pleased to hear about your success in making the WAU a station-wide presence.” The letter insisted that Dr. Ross must be able to “steer and study” the WAU from Alpha without interference.

After the catastrophic Impact Event that wiped out all surface life, the WAU's primary protocol became preserving humanity. To achieve its goal, WAU used the structure gel to physically manifest, initially occupying a large part of its core chamber, which then reached out to machines and life forms around the PATHOS-II facilities.

Shortly after the comet's impact, the WAU modified the pilot seats around PATHOS-II, originally used to pilot working robots, in order to brain scan any user. This scan caused a spike of electromagnetism surrounding the pilot helmet which also caused symptoms such as nausea and headaches to occur in the user. These seats were later used by Catherine Chun to make brain scans for the ARK project since this method proved more effective than the conventional neurograph scanning technique.

On June 6, 2103, at Theta, Imogen Reed investigated a machine that was corrupted by the WAU, dubbed the "Vivarium". The machine proved capable of creating an artificial reality, which prompted Catherine to use it as a prototype for her ARK project.

The WAU is responsible for the total destruction of the Lambda crew. It mortally wounded Jessica Davis and reanimated her, made Adam Golaski kill Richard Holland and later transformed him into one of its monsters, and killed and infected Martin Fisher. It later killed Dorian Cronstedt and made Fisher kill Baxter Rogers. Only Imogen Reed and Vanessa Hart came out of the incident alive.

In December 2103, Imogen Reed shut down the geothermal power generator of Upsilon in an attempt to kill the WAU, which also caused Reed's death as the ventilation-turbines shut off, killing her by asphyxiation. WAU regained power autonomously from Alpha for a limited amount of time.

On December 27th, 2103, a halfway-dead Dr. Ross was recovered from the Abyss Climber Rig by the Omicron staff, who placed his body inside a containment cell. Though the manipulation of electromagnetic fields, the WAU remotely directed the structure gel inside of Dr. Ross to repair and alter his body. The very same electromagnetic energy put significant strain on Omicron's equipment, including the blackboxes inside all of the human staff, causing severely debilitating headaches.

During this time, the mutated Dr. Ross telepathically spoke to Omicron dispatcher Raleigh Herber, revealing to her the existence of site Alpha and his plan to destroy the WAU with a special strain of structure gel. On January 16th, 2104, before Herber could complete the mission, the WAU "shrieked", overloading the Omicron staff's blackboxes and causing their heads to explode. In one swift blow, the vast majority of the surviving humans at PATHOS-II had been eliminated.

On March 9, 2104, the WAU uploaded a brain scan of Simon Jarrett into a Cortex Chip inside Imogen Reed's body, which has now been placed on a pilot seat in Upsilon (presumably by the WAU as well).[1]

The WAU never attempts to directly intervene with Simon and Catherine's plans to reach and launch the ARK, however its offshoots do. These include the Construct, the Fleshers, the Proxies, Robot Girl, the Universal Helpers, Jin Yoshida, and all the structure gel-infused marine wildlife inside the Abyss.

At Upsilon, Simon encounters the mockingbird of Carl Semken, stuck on a conveyor belt.

Amy Azzaro can be found fused into a stalk from the WAU, being kept alive artificially.

At Theta, the DUNBAT contains the brain scan of an unknown person. Upon realizing its state, it begins lashing out while cursing Catherine's name, ultimately causing the vessel to break from its dock and fall, destroying it. It is presumed that the WAU was the one who uploaded the brain scan into the DUNBAT.

While Simon is travelling through Omicron, Dr. Ross attempts to contact Simon at random intervals in order to persuade him to help stop the WAU.

While Simon is travelling to Tau through the Abyss, Dr. Ross guides Simon towards Alpha, with the intent of using him to destroy the WAU once and for all. Dr. Ross reveals that the structure gel used by Simon to fix Raleigh Herber's Haimatsu Power Suit was actually a modified variant of the substance, created by Herber with the intent of using it to kill the WAU. This means that Simon is capable of carrying out Dr. Ross' initial plan.

Simon is lead to the center of Alpha where the WAU's heart resides. By this point, the WAU has already created a massive heart-like growth in the center of its chamber.

Dr. Ross pleads with Simon to kill the WAU. If Simon refuses, Dr. Ross will attempt to force him but fail and the WAU be left unharmed. If Simon accepts, he inserts his arm into the WAU, a rudimentary solution of injecting the modified structure gel, then Dr. Ross will attempt but fail to kill Simon to prevent the WAU from learning of his immunity to the modified structure gel.

WAU's name is likely based on the archaic Greek letter Wau, also known as Digamma, one of three Greek letters that fell out of use, the other two being San and Koppa. Interestingly, it's name is incredibly similar to that of the site closest to Alpha, Tau.

Concept art for one of the original earlier versions of the WAU.

Concept art for the corrupted form of the WAU.

Concept art for the main sphincter of the WAU's corrupted form. 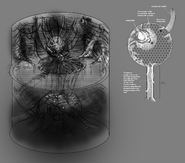 Concept art for the corrupted Core Isolation Laboratory, where the WAU is chambered. 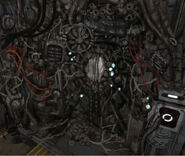 Concept art of the WAU's presence.

WAU logo on a robot in an early version of a flooded Lambda, as seen in the Lambda manifestation video.

Ditto, the robot itself.

The WAU logo on a cap, being the second variant of the logo but with yellow text. 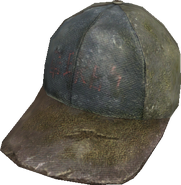 The cap as seen in the final game, which looks identical with the exception of the missing WAU logo.

A red variant of the main logo, only seen in the exit tunnels of Alpha.

A white variant of the main logo, only seen in the exit tunnels of Alpha.

A commonly used variant of the WAU logo, using a smaller font in lower case for the text.

A white variant of the logo, seen on the elevator at Theta.

A yellow variant of the logo, seen on the WAU circuit map.

A photo of the WAU in it's original incarnation, shortly after it was built. Found only in a Carthage Industries binder in Sarang's room.

A photo taken by Dr. Ross of the WAU's first stage of growth, scribbled over by Dr. Ross.

Ditto, of the WAU's second stage of growth.

Ditto, of the WAU's third stage of growth.

Ditto, of the WAU's fourth stage of growth.

Ditto, of the WAU's fifth stage of growth.

An uncropped, clean photo of the WAU's first stage of growth.

Ditto, of the WAU's second stage of growth.

Ditto, of the WAU's third stage of growth.

Ditto, of the WAU's fourth stage of growth.

Ditto, of the WAU's fifth stage of growth. 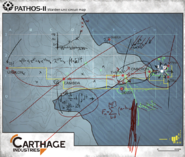 A map showing the WAU's influence on PATHOS-II all the way from Alpha, scribbled over by Mark Sarang. 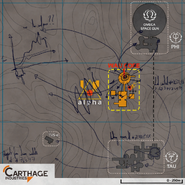 A map of Alpha, scribbled over by Dr. Ross calculating the WAU's growth.

The WAU, as it is seen in SOMA.

A WAU Control Board. 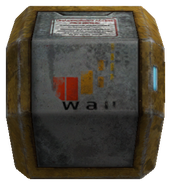 A small version of the WAU Control Board. 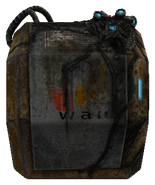 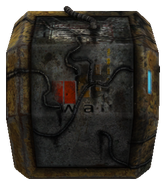